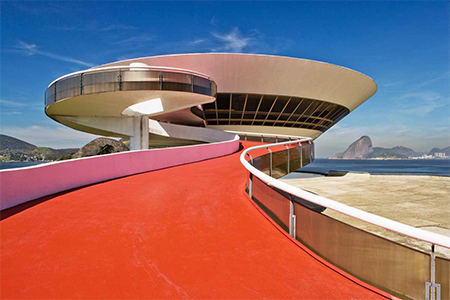 The third presentation of the Cruise collection by Louis Vuitton will be presented in Rio de Janeiro, Brazil, whose exhibition will be held on Saturday May 28 at the Niterói Contemporary Art Museum (MAC), an emblem building of Brazil, designed by the famous architect Oscar Niemeyer.

"This location inspired me immediately. After the property of Bob and Dolores Hope designed by John Lautner in Palm Springs, California, we continue with the very particular architectural tour of the Louis Vuitton Maison. It is to be transported to a relationship where nature, geography and architecture come together into the vision of a great architect, as was the case with John Lautner. With the Cruise 2017 collection, we are discovering the vision of Oscar Niemeyer", explains Nicolas Ghesquière, artistic director of woman collections for Louis Vuitton.

This edgy and iconic building, characterized by its flying dish form (like a UFO) overlooking the Guanabara Bay, was built in 1991 and opened in 1996, and this is the first time the museum hosts a fashion show, which coincides with the 20th anniversary of its existence and its re-opening to the public after a major refurbishment.

"Three months after the Olympics, the eyes of the world are in Rio and we are excited to be here at this time. Once again, we are setting a journey of discovery to a different place with his incredible spirit and culture, as well represented by the work of Niemeyer and this architectural wonder out of this world ", said Michael Burke, Chairman and CEO of Louis Vuitton.

After the fashion show, the Louis Vuitton Maison will support the artistic program of the museum with four exhibitions over a year: Ephemera (June -July 2016), Guanabara Bay: Hidden Waters and Lives (August to October 2016), Almir Mavignier - Permutations of Light : Form & Transformation (November 2016 to January 2017) and Oiticica: Infinite Dimension Environmental Constructive Will (February to April 2017).

The Louis Vuitton Cruise Collection will be broadcast live on May 28 through www.louisvuitton.com