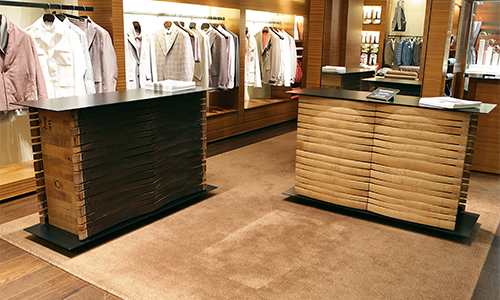 At the Salone del Mobile Milano 2016, which presents the latest design trends for decoration, Ermenegildo Zegna has partnered with San Patrignano, Gian Marco and Letizia Moratti to present Adam & Eve by Peter Marino, as part of Barrique, the Third Life of wood, which aims to help San Patrignano youth in their rehab through creative work with wood recycling.

This social and humanistic work collaboration by Zegna and San Patrignano began in 2012, and today houses a permanent exhibition with more than 46 pieces handmade by the youth of San Patrignano Design Lab, the same designed by several prestigious architects and designers.

This 2016 features a cabinet designed by Peter Marino architect, who has collaborated with San Patriagnano since the 80s, which is called Adam & Eve, and has incorporated the original oak barrel staves and a series of inclusive contrasts that evoke the masculine and feminine duality.

Thus, Adam side shows the barrel staves, a lighter color and a convex shape; while the Eve side displays components of the barrel´s inside, concave forms and the characteristic purplish hue obtained after saving the wine.

Adam & Eve were presented in Milan on April Monday 11 at the Ermenegildo Zegna flagship in Via Montenapoleone, and will be on display throughout the Salone del Mobile 2016. It should be noted that when Fondazione Zegna allied with San Patrignano was through the tissue department,  leveraging the brand knowledge on artisanal handmade -masterfully dominate by Zegna-, and it is one of the oldest crafts that has been taught at this community for over 30 years.