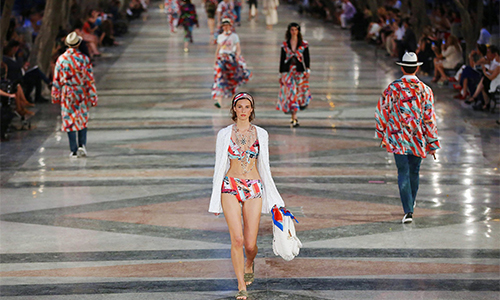 Cuba saw the fullness of their potential as a world center of style and fashion through the Cruise Chanel parade at the boulevard of Paseo del Prado, where its creative director Karl Lagerfeld,  show a collection with completely referential elements of the most emblematic issues about this Latin American country and its African influence.

We could see models completely in tune with the representative Chanel look, in elegant combinations of black and white loaded with accessories, two-tone shoes, jackets and hats, as well as the iconic femininity of the brand in each garment. However, other new elements like the Che Guevara hats or military colors like olive green, as well as reminiscent concepts of the Cuba from the 40s, were a nod to the history of the island as a source of inspiration and style.

This is the first parade Chanel in Latin America and the very first event of its kind in the Cuba history. After the parade, there was a party offered in the Plaza de la Catedral, where the guest enjoyed the best drinks, gastronomy and music of Cuba.