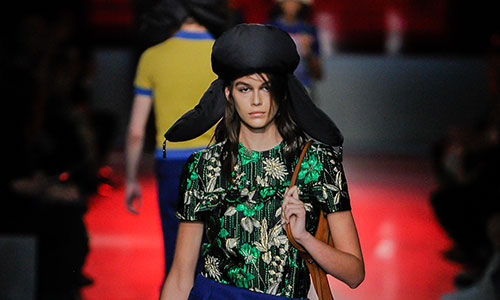 The Piano Factory of New York was the venue selected for the Prada Resort 2019 collection fashion show. The choice of Prada’s headquarters was because the place opens the door to a new and unknown world of Prada New York. The transformation of the old piano factory was the first project entrusted to Herzog & de Meuron by Prada in 2000.

The appointment of the show was at 6.30 pm and took place on the 7th floor, making visible the bare structure of the building with its expressive concrete pillars, adding large floating panels, making it possible to transmit images of the real city inside the space of the Show. In addition to the real image of the city, the models appeared as if they were walking at the real place.

The panels allowed or blocked the daylight. The dominant color of light in the exhibition space was dark silver, red and black. The red panels and the lighting system installed in the windows created an atmosphere of "increased sunset", to enhance the artificiality and contrast with the daylight on the outside. Everything happened on a stage with contrasting sequences of the visible and the invisible, the bright and the dark, the noisy and the silent.