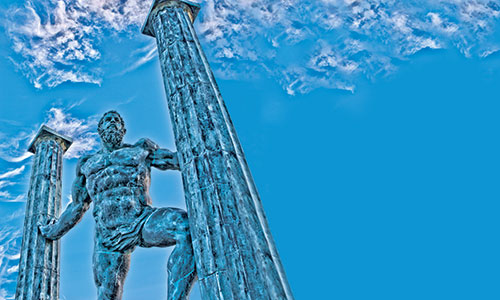 The existence of the Pillars of Hercules has been narrated since archaic times. They are present in Phoenician tradition, who associated the rocks, at each end of the Gibraltar Strait, with the Pillars of Melqart—a representation of the Canaanite god Baal (god of rain, thunder and fertility), which in turn was linked to Heracles (Hercules)—and were named the Pillars of Hercules. To them, the rocks marked the limits of the known world, a concept that was also adopted by the Romans.

The demigod Hercules was born of a relationship between Alcmene (a mortal woman) and the god Zeus, from whom he inherited supernatural powers; inhuman strength was one of them. He was barely a baby when the goddess Hera—Zeus’s legitimate wife—tried to kill him in a jealous rage by placing two snakes in his crib, but they were defeated by the newborn hero.

Years later, Hera’s fierce hatred manifested itself yet again; this time she tricked Hercules into drinking a potion that drove him mad to the point that it made him confuse his wife and children for enemies and murder them. After that atrocity, and as punishment for this offence, he was condemned to serve Eurystheus of Tiryns for 12 consecutive years. His new master, driven by his envy of Hercules, attempted to eliminate him through a series of 12 labors seemingly impossible to achieve. 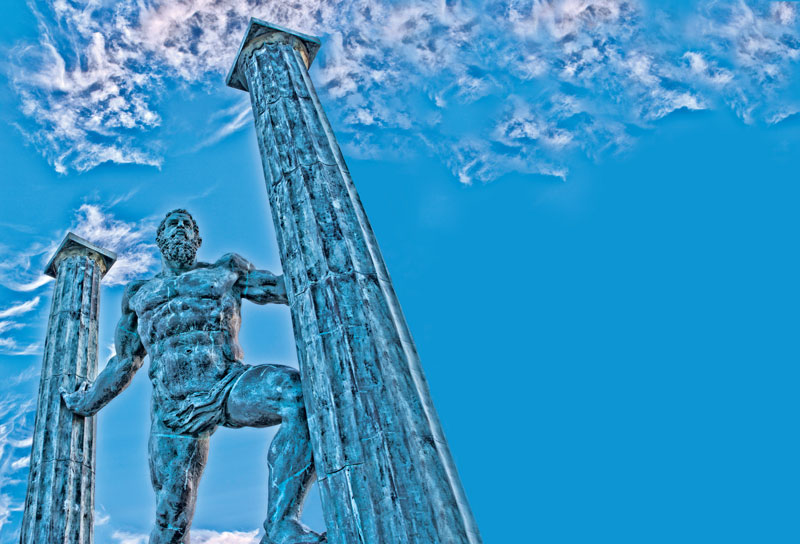 All known sources prove that, in times before Plato, Greeks only knew, and clearly mentioned, only one set of ‘Pillars of Hercules,’ the ones at the Strait of Gibraltar, next to the Atlantic and the region of Gadeira.
Georgeos Díaz-Montexano, Atlantologist, Writer, Explorer.

These 12 labors were: to get the skin of the Nemean Lion, to kill the Lernean Hydra of multiple heads, to capture the Cerynian Hind, the Stymphalian Birds, and the Erymanthian Boar. To clean the Augean Stables in one day, he changed the course of the river Alpheus to flow through them. Other feats involved capturing the Cretan Bull, the Horses of Diomedes, the Cattle of Geryon; he also had to secure the Girdle of the Amazon Queen Hippolyte and steal the Golden Apples of the Hesperides, and lastly, to capture Cerberus, the guard dog of Hades (the Greek underworld). All these feats were accomplished one by one, and Hercules was victorious in each of them. 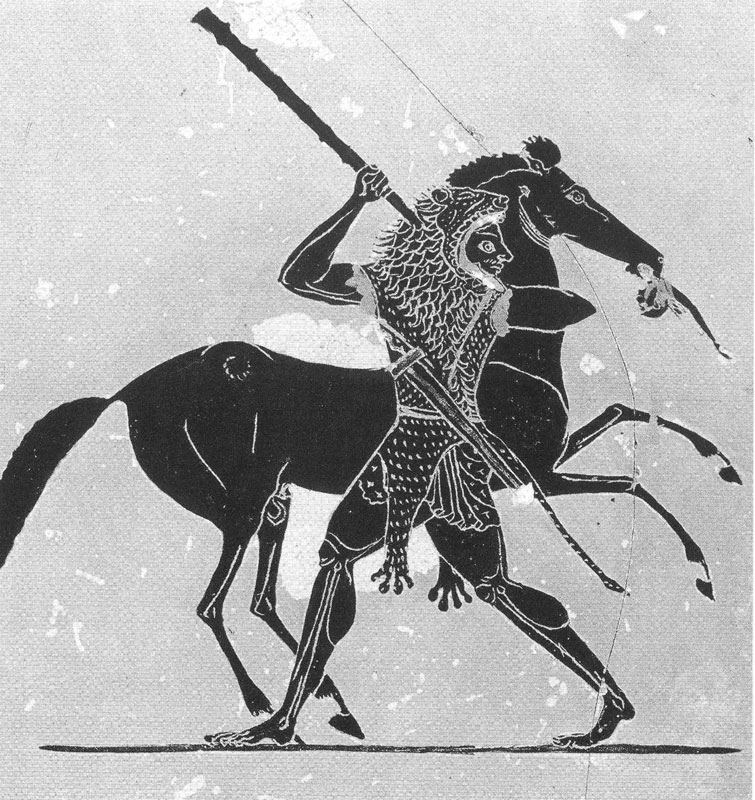 Attic vase from 510 BC illustrating Heracles charging one of the mares.

Finisterre - Non Terrae Plus Ultra  No Land Beyond

To accomplish the tenth labor of capturing the Cattle of Geryon (a giant monster with six hands and three bodies that was considered invulnerable until Hercules defeated him) had to overcome many obstacles. One of them was the closed path toward the Atlantic Ocean, blocked by a big mountain that he split in half; this created two peaks that separated Africa and Europe for good. This is how Mons Calpe (Gibraltar) in Europe and Mons Abila surged (some theories claim that it could be Jebel Musa, located north of Morocco, and others say it is Monte Hacho, which overlooks the autonomous city of Ceuta.) Thus, he managed to reach Erytheia through the new liberated ocean. In another version of this myth, the Columnae Herculae were built by the hero himself to warn that these mountainous peaks at each end of the Strait of Gibraltar marked the limit of the known world, the end of the sea, the beginning of chaos, the unknown; this was a firm belief in ancient times through the Middle Ages, until Columbus’s voyages proved in practice that our beautiful planet is round.

Therefore, it is impossible to find a geographic location which marks its limits. From then on, “going beyond” means opening up the path to the seas that surround the lands from the new hemisphere, as well as the beginning of great, historic deeds from mankind. 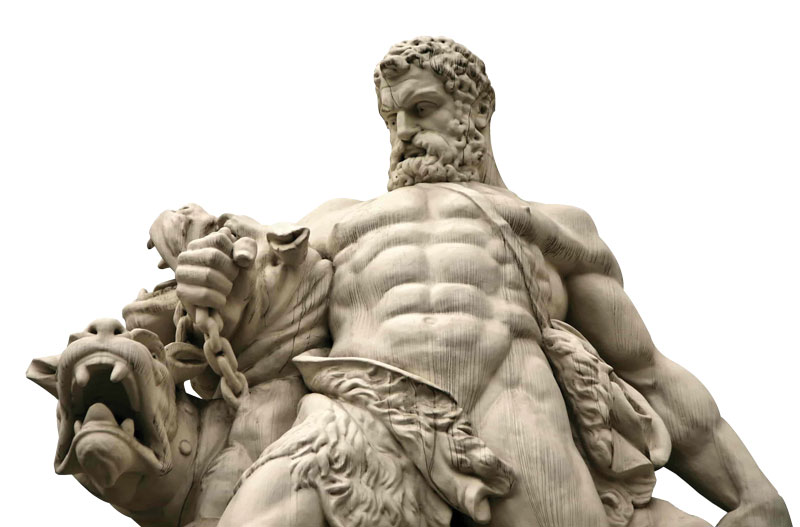 In 2007, sculptor Ginés Serrán-Pagán created two symbolic works dedicated to this myth. The first, called The Pillars of Hercules: Abyla and Calpe, represents the separation of the two continents, and the second portrays Hercules uniting the two pillars: The Union of the World: Monument to World Peace. They are two colossal figures of Hercules, sculpted in bronze, eight meters high and eight tons each. They are the largest works of art depicting Classic mythology in the contemporary world, and symbolize the place where some claim the myth took place: the Strait of Gibraltar. tar.

The image of Hercules and his myths are present in every corner of the Strait of Gibraltar. 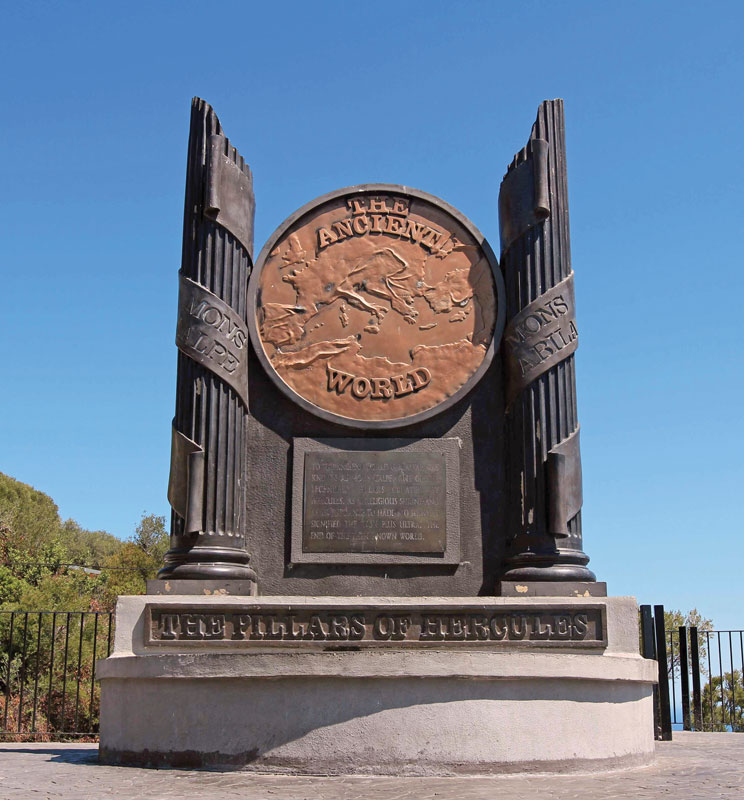 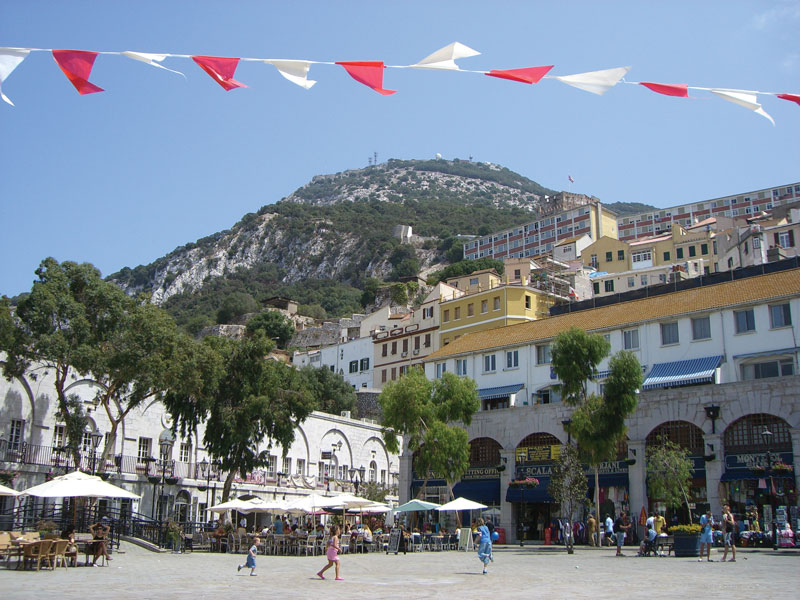 Grand Casemates Square is in the center of Gibraltar, witness of its most relevant moments in history.