The Route to Man’s Origins 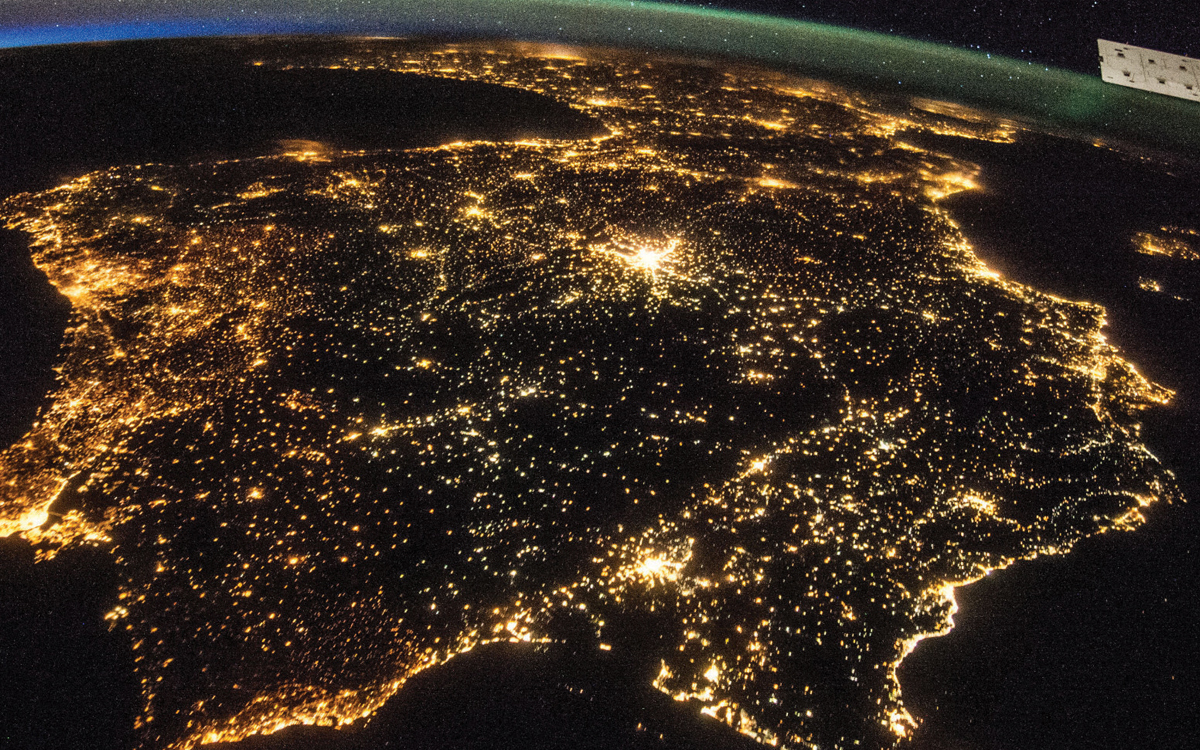 Our imagination goes wild at the thought of this place on earth where Africa and Europe face each other; from the Rock of Gibraltar, nestled in the Iberian Peninsula, the African coasts of Ceuta (Spanish colony in Moroccan territory) sit clearly in the horizon.

Its cultural importance began in prehistoric times, when primitive men crossed from one continent to the other through the Strait from Ceuta, where it is believed our ancestors settled 250,000 years ago. According to the history of the origins of human beings on the planet, the first one was the Australopithecus, found in the South African region; they lived between 1,000,000 and 600,000 BC. The Homo Habilis existed in the same period, and they already displayed skills in tool-making and included meat in their diet. Afterwards, the Homus Erectus lived between 500,000 and 200,000 BC, and had solid maxillary bones, big teeth, and a smaller brain than their predecessors; they were also better adapted for a straight walking posture. The Homo Neanderthalensis was thus named because they were located in Neandertal, Germany, although there were similar discoveries in France, Yugoslavia, Palestine and South Africa; they might have roamed the earth around 120,000 to 60,000 BC. 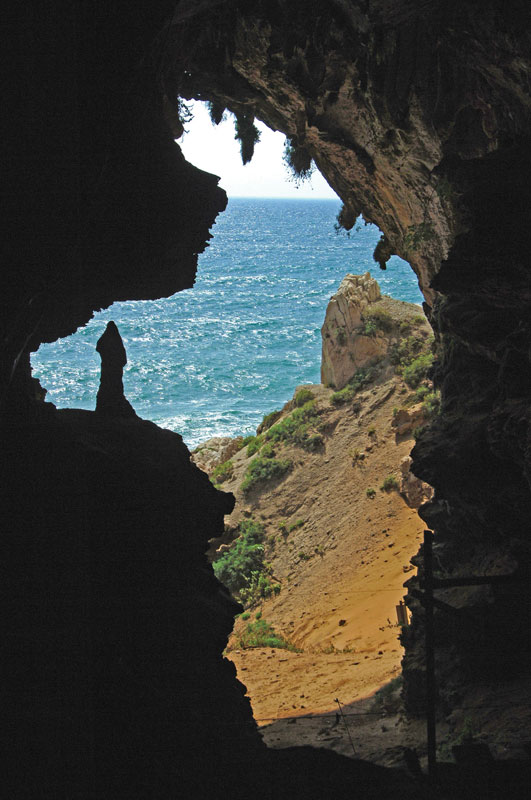 Five million years ago, in the beginning of the Pliocene epoch, the salinity crisis was interrupted when the waters of the Atlantic overflowed the Gibraltar threshold, breaking through it, and with a colossal waterfall that lasted 100 years the Mediterranean was created. Gondwana and
Laurasia were separated.  The Strait of Gibraltar emerged. Carlos Ruiz Bravo, researcher 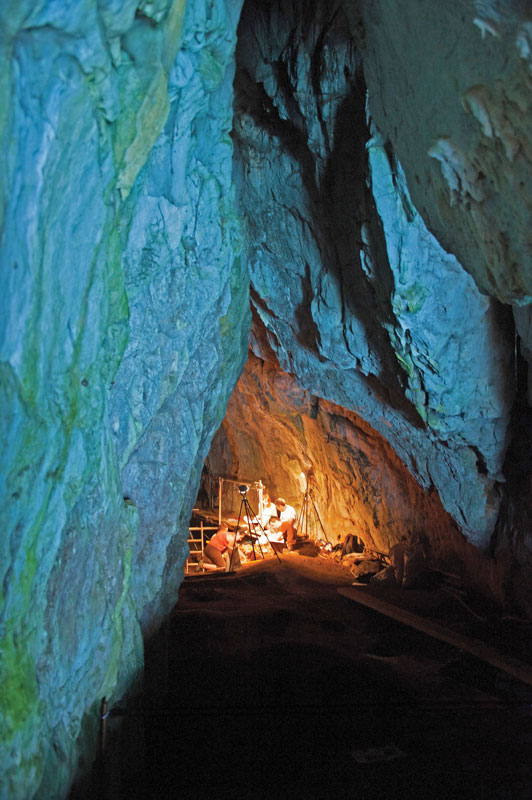 Scientists theorize that approximately 50,000 BC, the first human settlements were formed in the Strait. However, the discovery of a Homo calpicus (Gibraltar Man) cranium and other tools, suggest they inhabited the area 40,000 years ago in four caverns—among them, Gorham’s Cave—that have been granted UNESCO World Heritage status due to the identifiable trace of Neanderthal dwellings. Other unquestionable proof was immortalized in different caves in the form of parietal art, which belonged to the Middle and Upper Paleolithic, the Neolithic, and the Bronze Age. 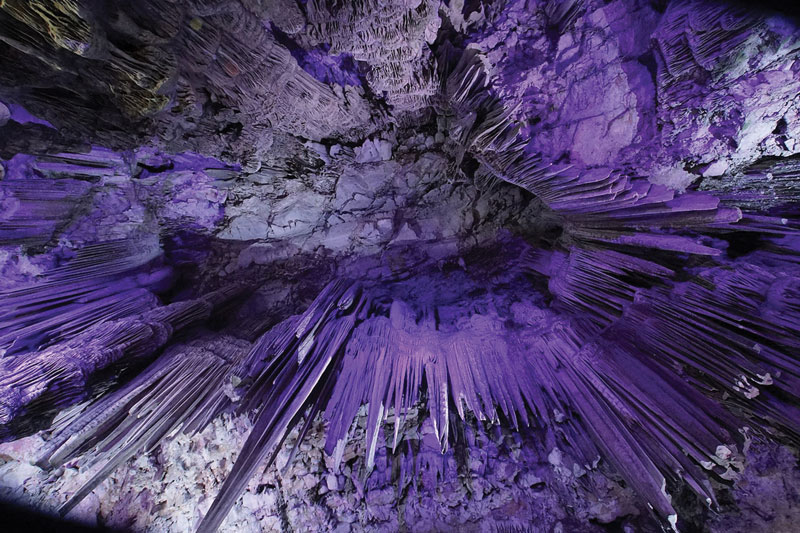 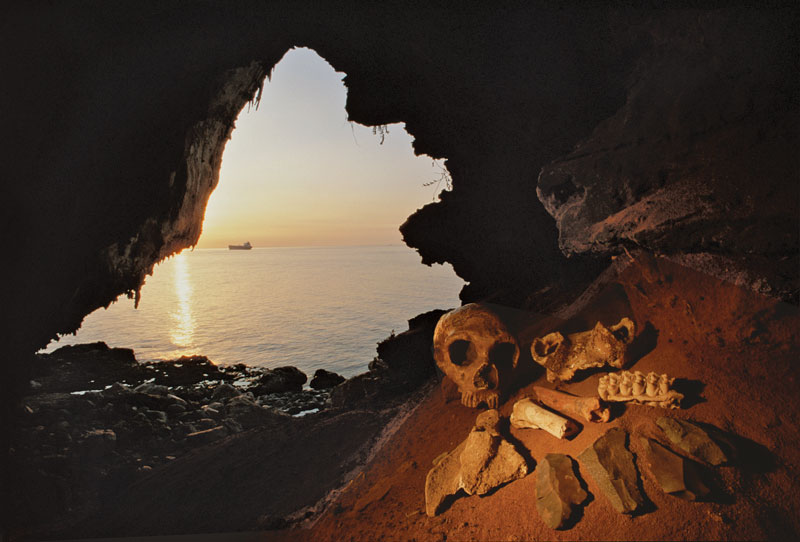 Skull of a female Neanderthal in a cave in Gibraltar. 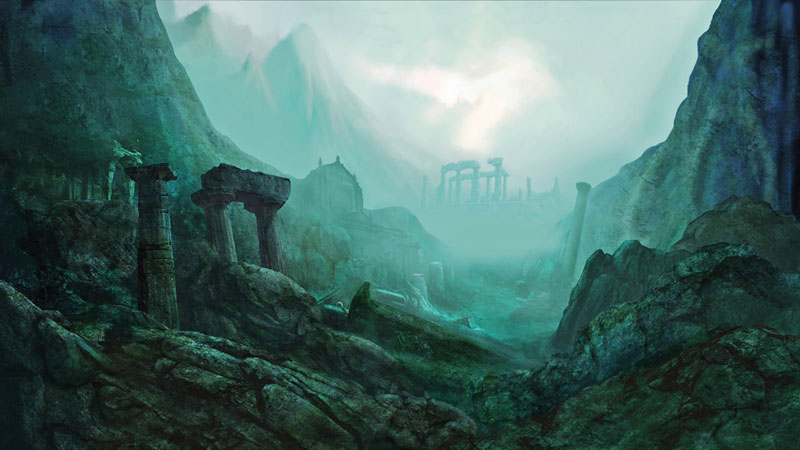 Finding Atlantis is still an ambition that haunts humanity

In the year 2000 BC, Iberians and Berbers inhabited both ends of the Strait of Gibraltar. From 1500 to 5000 BC, the presence of the mythical city of Tartessos is confirmed, as well as the Spartel Bank, lost underwater around 9000 BC, which could also be considered as the lost Atlantis, referenced by Plato in his Dialogues.

“Nine thousand was the sum of years which had elapsed since the war which was said to have taken place between those who dwelt outside the Pillars of Heracles (…) the combatants on the other side were commanded by the kings of Atlantis, which, as was saying, was an island greater in extent than Libya and Asia, afterwards sunk by an earthquake.” (Critias - Plato’s   Dialogues) 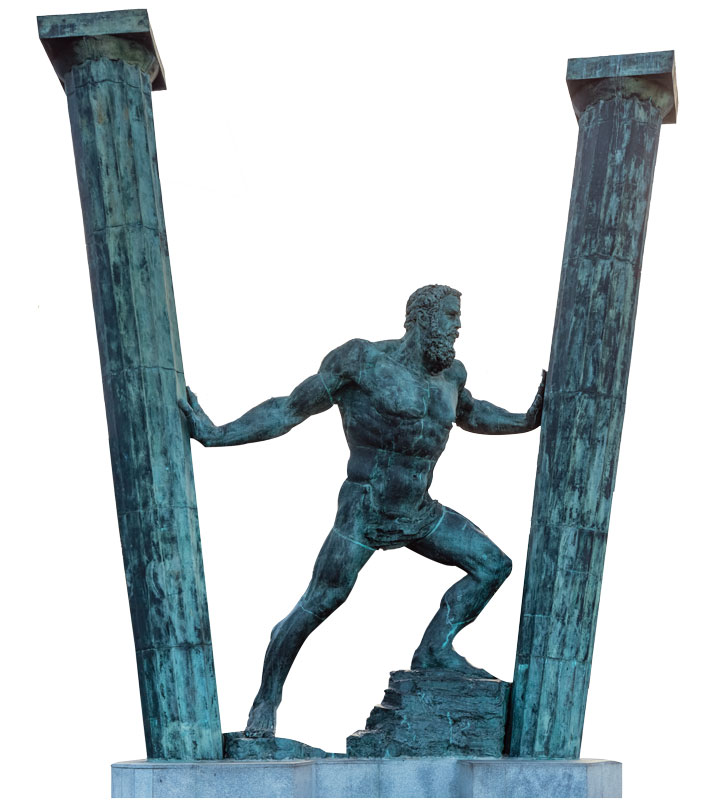 The Pillars of Hercules: Abyla and Calpe, sculpture by Ceutan artist Ginés Serrán Pagán. It is 7m high and weighs 4 ton 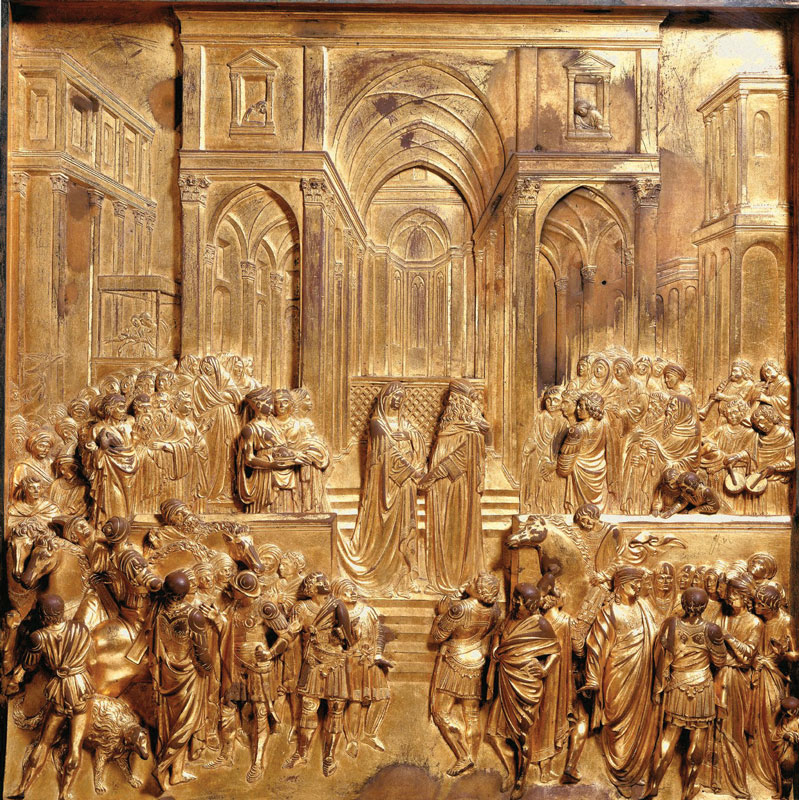 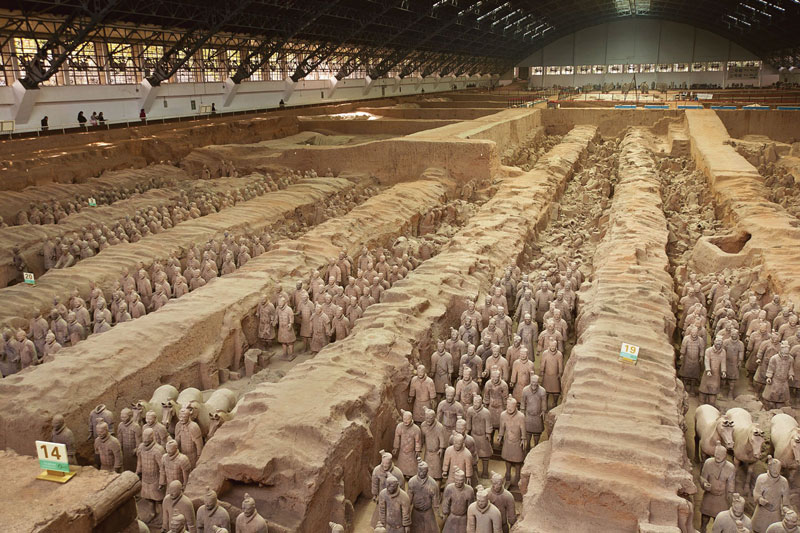 The existence of the Kingdom of Tartessos was referenced by the Greeks in the 6th century BC and in biblical texts .

From 1450 BC onwards, the Phoenicians (a civilization that originated in the Middle East from Lebanon, Syria, and Palestine) became the protagonists of every major event. According to Herodotus, they arrived to the Mediterranean from the coasts of the Persian Gulf, following the coasts of Arabia, and brought with them treasures of human intellect: the alphabet, astronomy, medicine, and stoic philosophy. Socially, their skills regarding the expansion of international commerce are notable, along with their diplomacy, orderly city life, Phoenician democracy, as well as glass, purple ink, and ships. The first graphic testimony of navigation across the Strait goes back to 1000 BC: a painting in the cave of Laja Alta depicting Phoenician ships; they marked Mons Calpe (Gibraltar) as the limit for Mediterranean navigational security. 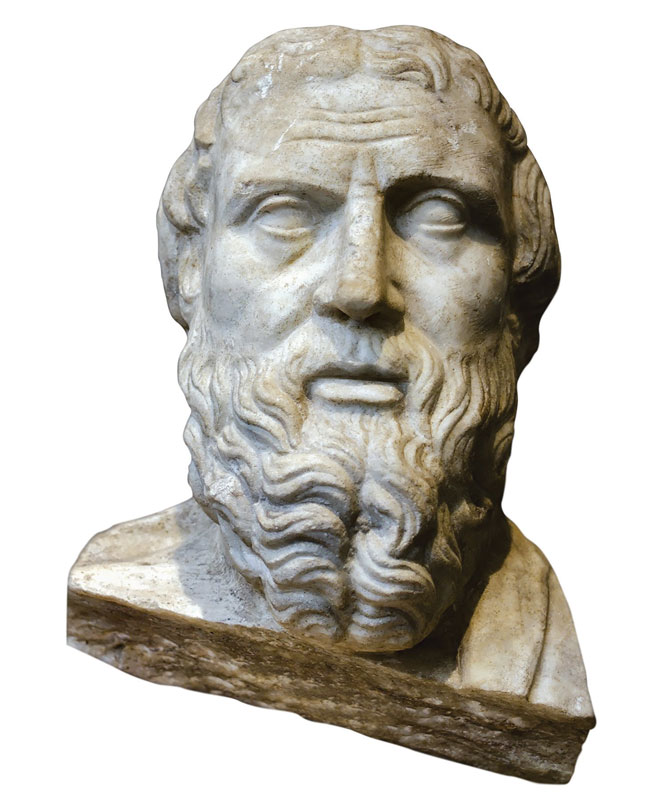 Herodotus (426 BC), Greek historian considered as the Father of History since ancient times. 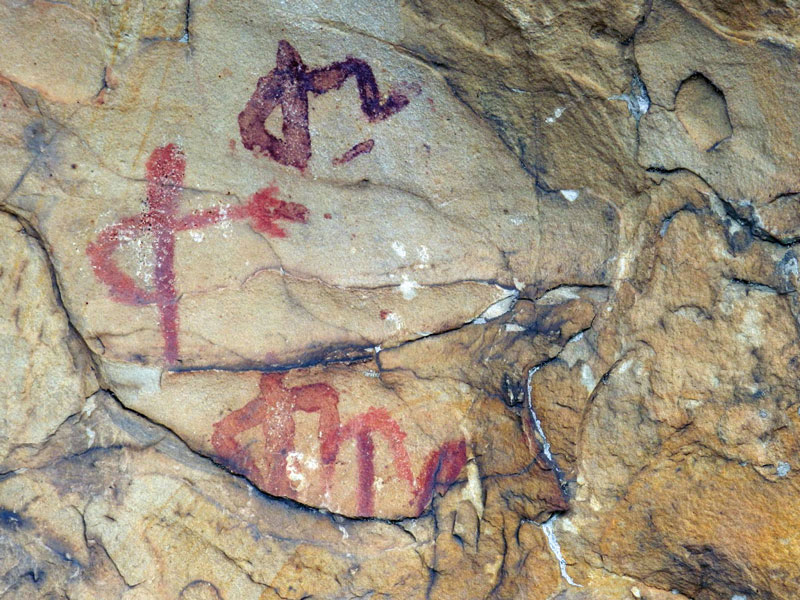 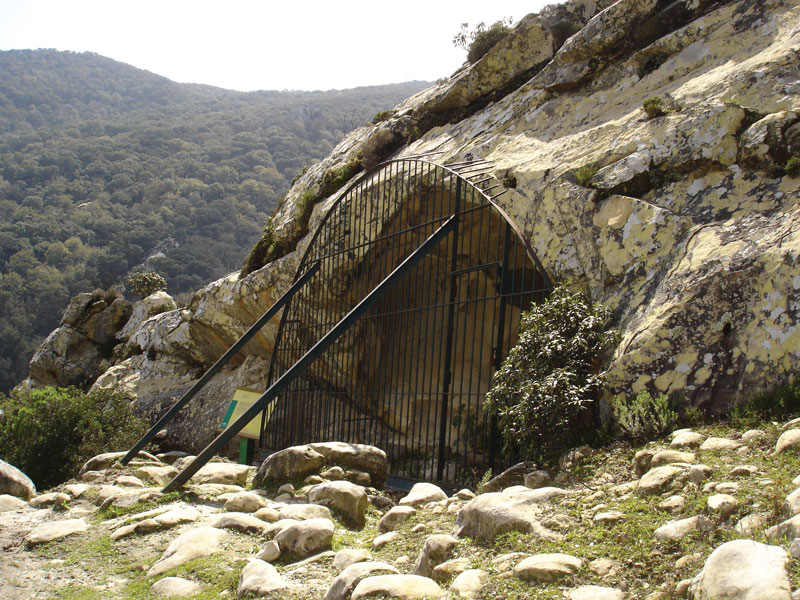 Entrance to the cave of Laja Alta.

The African coast of Ceuta, Spanish territory in Morocco 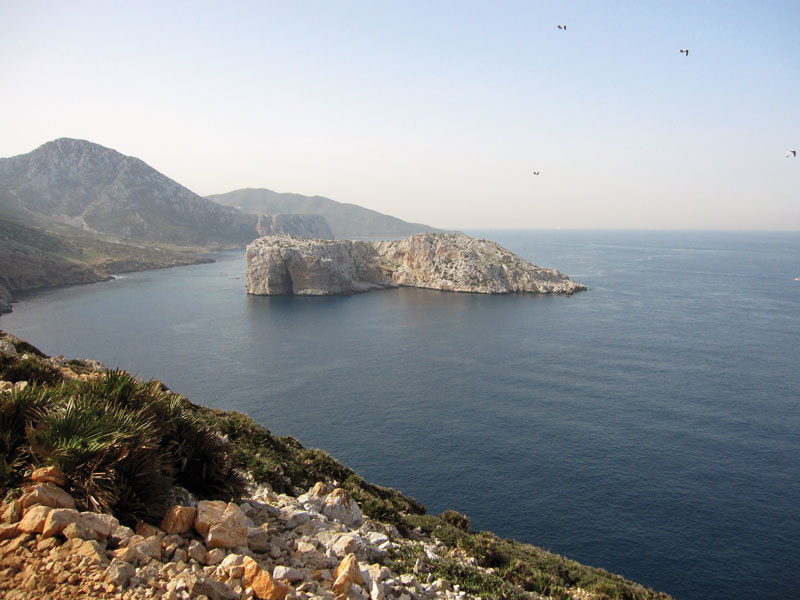 Perejil Island could be Eritrea: scenery of Hercules’ tenth labor. 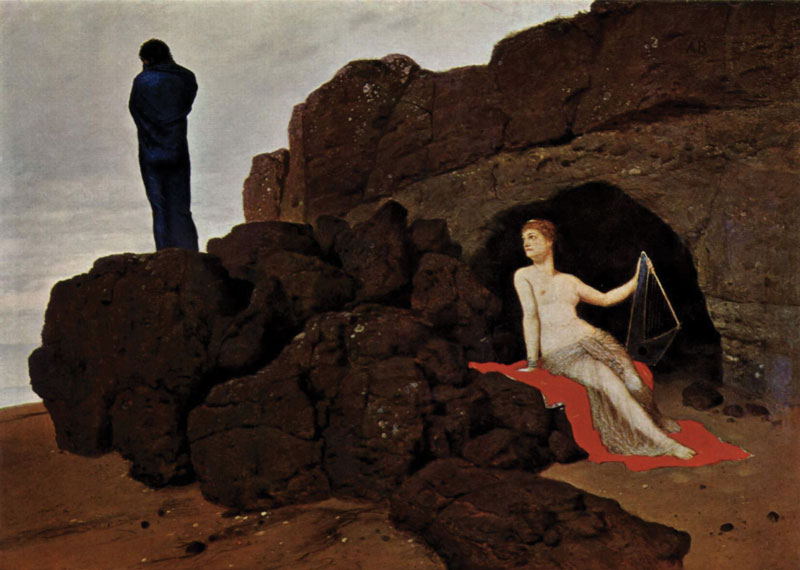 Perejil Island could be Ogygia, from the Odyssey by Homer 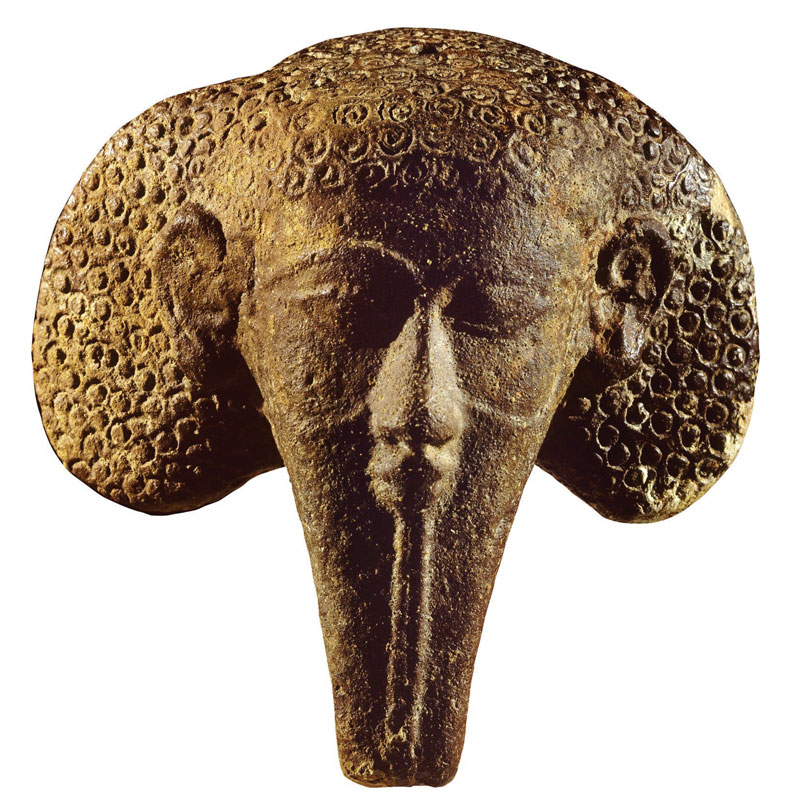 The Phoenicians played a preponderant role in the Strait of Gibraltar

In the 7th century BC, Greeks occupied Abyla (Ceuta); it was then that they appointed the Strait as the scenery for the Pillars of Hercules, which were previously known as the Pillars of Melqart by the Phoenician. From then on, many battles between Phoenicians, Carthaginians, Greeks, and Romans took place; subsequently, there were confrontations between Byzantine, Berbers, Dutch, French, Spanish and British in a series of events of great significance: moments of rivalry and the interconnection between worlds.

It’s necessary to awaken the imagination, since specialists argue that, in terms of the Strait of Gibraltar, it’s better to follow its trail through mythology, because history lives in it: kings, philosophers, and heroes from ancient lost civilizations, narrated by the Greek, Phoenician, Egyptian and others—many of them turned into gods thanks to the fantasy in the stories. It is said, for example, that Eritrea—where the tenth labor of Hercules took place—would be Perejil Island (an islet near the Rock of Gibraltar that is currently uninhabited). Other tales identify this site as Ogygia, where—according to the Odyssey—the nymph Calypso kept Ulysses for seven years. A legend says that Hercules founded Tangier, a Moroccan city, in the name of a woman called Tingis, whom he loved. Along the Strait, temples were built to honor Hercules, the favored hero in these lands and seas.

For a long time, the constant incursion of several civilizations in the Strait begot a multicultural legacy and patrimony, palpable in the architecture, gastronomy, literature and music. This is a journey that would never cease to be narrated, to be dreamed about with the sound of the wind, in the splashing of the waves created from the eternal embrace between the Atlantic Ocean and the Mediterranean Sea.

The Strait of Gibraltar is embodied by two civilizations: Eastern and Western, and two continents: Europe and Africa. It involves three countries: Morocco, Spain and the United Kingdom; their provinces or regions are Andalusia (Spain), Ceuta (Spain), Tangier and Tetouan (Morocco). Their cities are: Algeciras, La Línea de la Concepción, Tarifa (Spain) and the Rock of Gibraltar (United Kingdom). 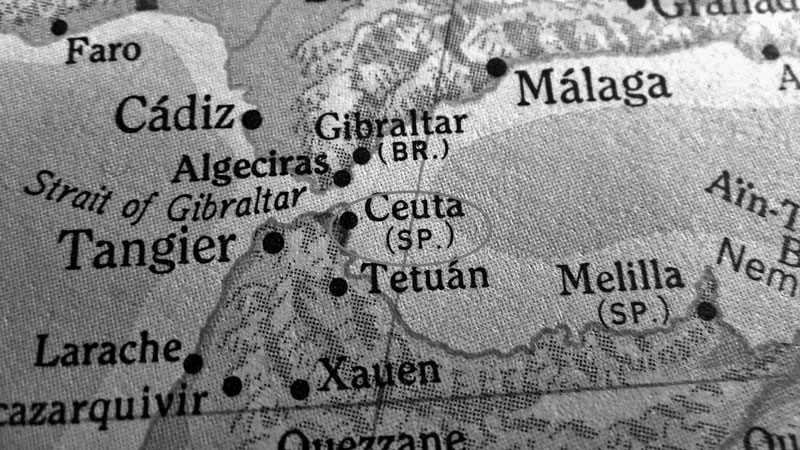 The components of the Strait of Gibraltar