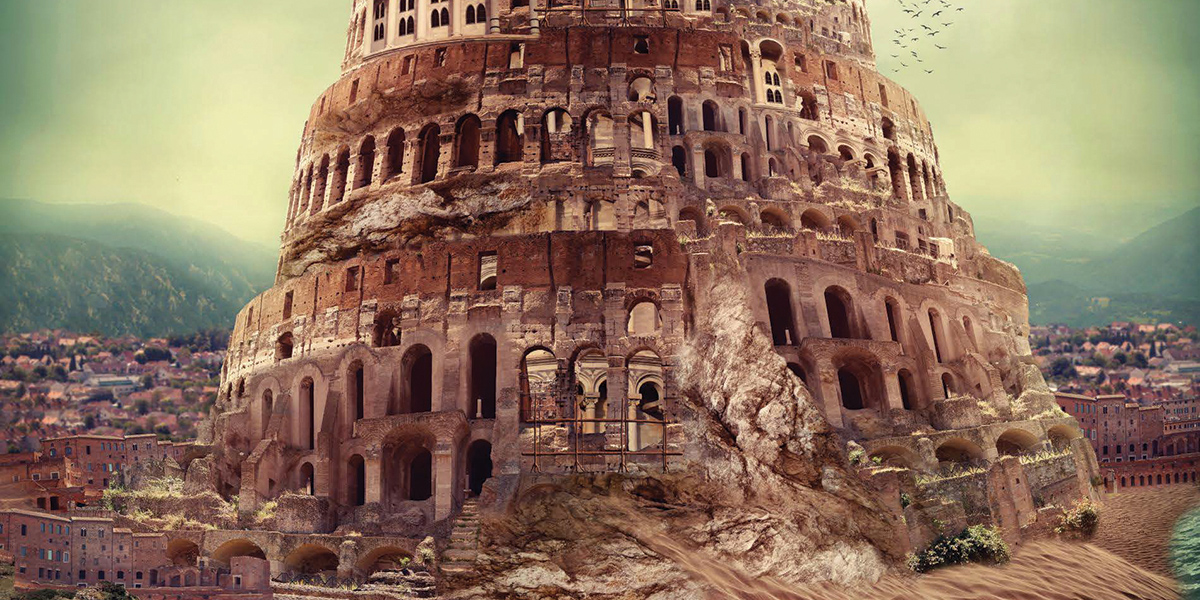 With the exception of mankind, no living being marvels at its own existence.
Arthur Schopenhauer.

Among human virtues, love is the first. And if it is strengths one is discussing, one must choose thought. Everything a human imagines, happens; perhaps not by their own hands, but once pro-jected, it is bound to happen.

Today, we pay tribute to life and we celebrate each individual who has come to this world with the spark of creating power. However, there are discoveries and inventions that were fundamentally for the evolution and preponderance of the humane. A method to light the fire, the wheel, agriculture, metal alloys, writing, music, different branches of science… the ability to cover all of history and the lengths of evolutions as a species, is undetermined.

Man and the elements

After a long evolution that began 4 million years ago, in Africa; the first humanoid stood on its hind legs, until becoming the ultimate Homo sapiens. An exodus which culminated was just beginning, when gradually it embarked on a journey to inhabit every corner of planet Earth.

Homo sapiens survived when uniting in groups or families to protect itself from its surroundings, where hunters and gatherers lived in constant battle with extreme climate, and with apparent weakness among creatures that were hungry and fierce.

Groups lived in refuge within caves, moving constantly to find the optimal location in bare, safe locations. Within the walls of caves they slowly became conscious of themselves, while narrating and leaving a mark of their own reflection. Maps, messages, print of the palms of their hands.

After the last ice age, 12, 000 years ago, the world and its geographic configuration changed radically. With an abundance of water from ice cap-melting, life and all wildernesses was transformed.

Hunters and gatherers adapted to learn and control their environment to obtain food and resources; coming up with tools, giving way to a technologically lined path, with results that overthrew all expectations and possibilities.

Groups grew, developing social lives, at all times guided and restricted by climate change and imponderable events like floods or falling meteors; and the strength of rivalry which began in early stages.

A mere 5,000 years have gone by, a speck with cosmic scales, when the first great empires are born. Since then, mankind has developed so rapidly that doubt is left behind regarding the possible existence of time and space travelers… Although societies still exist where roots and traditions remain attached to the land, in a social arrangement similar to that of ancestry, during the Neolithic revolution.

Kind and humid weather created communities and cities more and larger. The fist big civilizations established themselves to grow on the banks of rivers. In previous centuries, these empires took their place in China, Babylon, Mesopotamia, India, Egypt, Greece, Rome, among others; with extreme greatness in a cultural, scientific sense, and the not-so-noble arts of war.

Some contemporary anthropologists assure us that humanity has no race, as this terminology is only applicable to historical and cultural traits, but has become, through the passing of time, a set of physical and biological traits, which have undeniably led to a negative burden of segregation. Genetic studies suggest that physical traits are attributed to scarce pairing of genes.

It is possible to follow in the footsteps of great masterpieces and emblematic sites of evolution. The peak moments in evolution, the 7 wonders of the ancient world, selected most likely in the 7th century A.D., and those of the modern world, selected in 2007 through an international decision, with nearly 100 million voters.

Humanity through its wonders

They receive this name due to the difficulties and hardships of their construction, as well as their witness to human creativity and innovation. 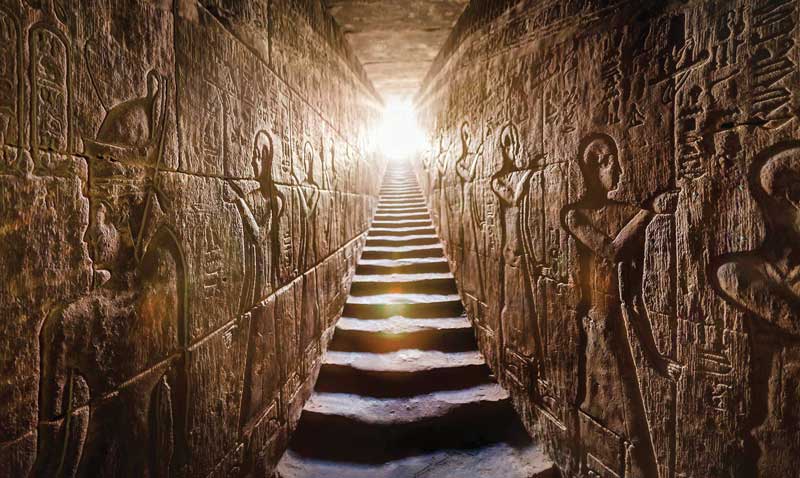 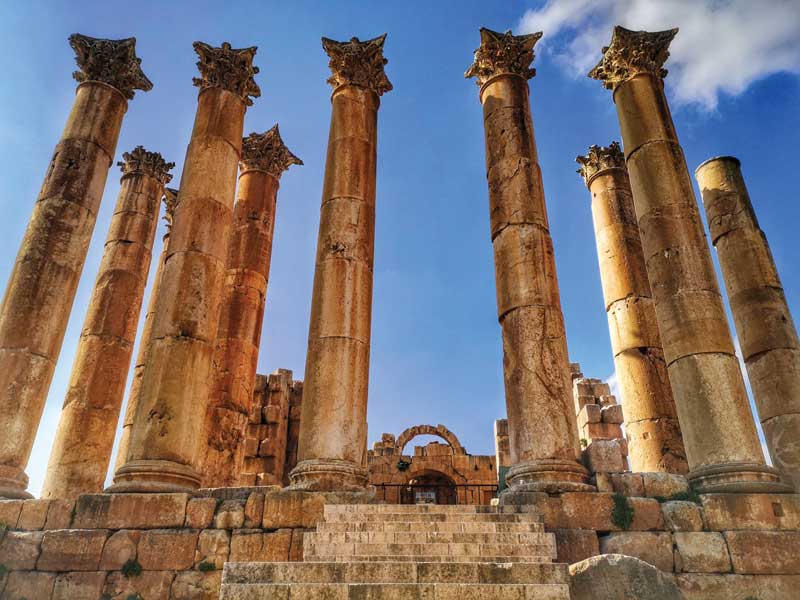 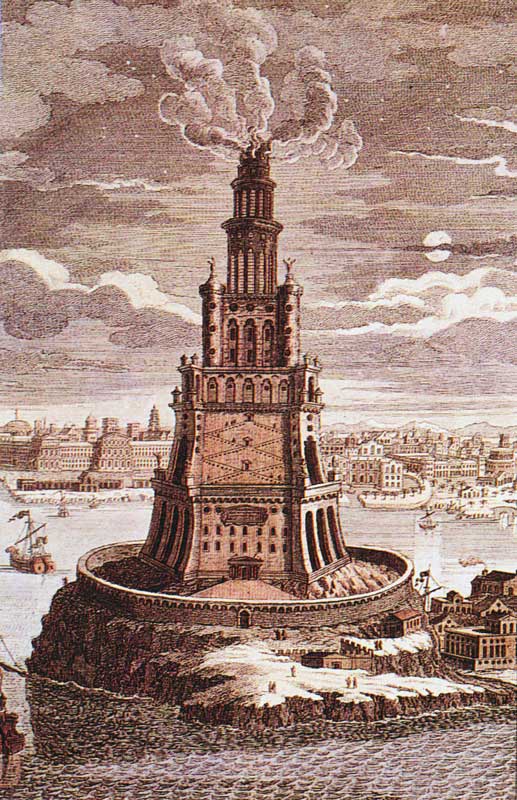 The lighthouse was built in the 3th century B.C., on the island of Pharos, across from Alexandria, during the Greek domination. It was called the light of the Mediterranean, as the 100-meter tower was clearly visible during day and night, thanks to a fire serving as a guide for sailors of the time.

The lighthouse of Alexandria is responsible for the word itself and the origin of constructions of the sort. It stood until the XIV century and is mentioned in the works of Homer, Hesiod and Herodotus. Today, Alexandria is one of the main cultural sites of Egypt, near the Aboukir Bay.

Built by King Nabucodonosor, known as a great builder, in Babylon, nowadays Iraq, on the banks of the Euphrates, it is believed that the Garden of Babylon were planted on starlike terraces of around 20 meters in height. They were abandoned in the 5th century B.C. Many mysteries still surround this wonder, as some doubt their existence, while other theories locate them elsewhere in the area. Their majestic nature is connected to an exhibit of supremacy in a symbolic plane. 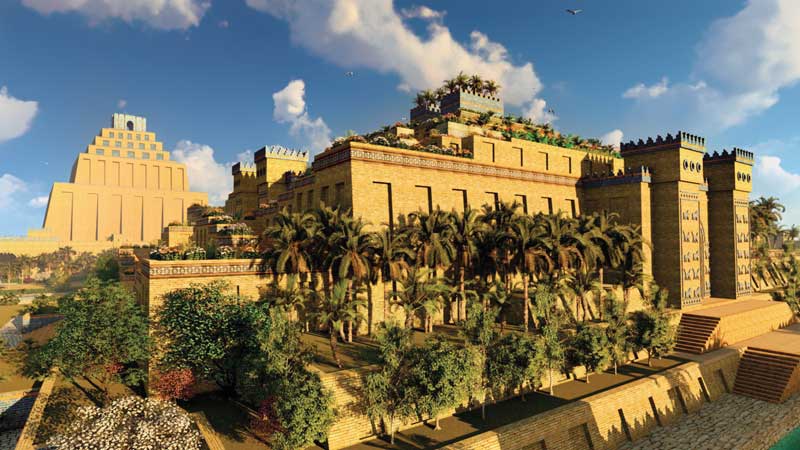 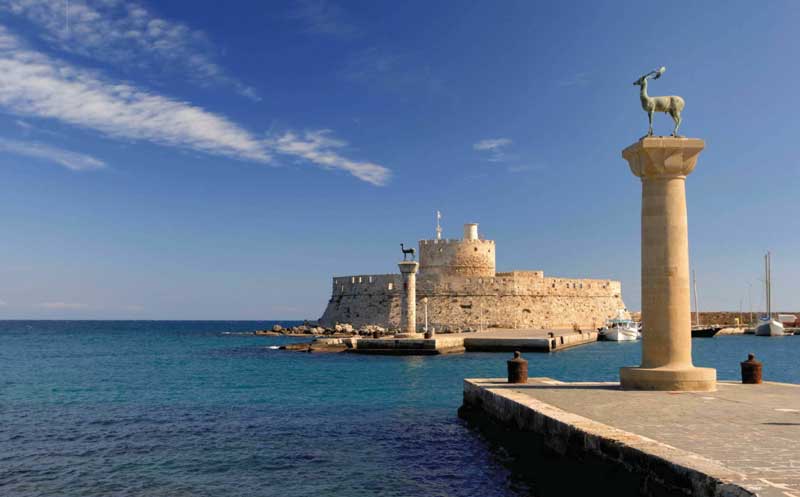 The Colossus of Rhodes. 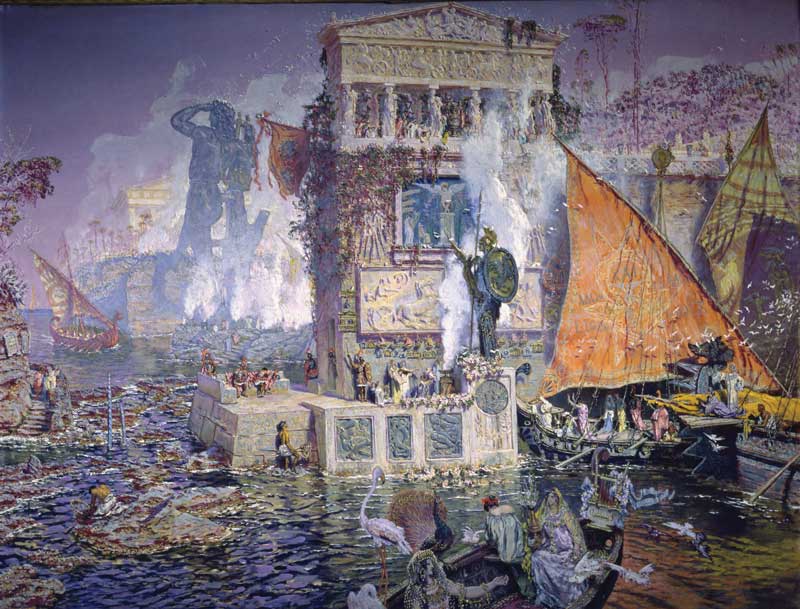 The Colossus of Rhodes.

The Colossus of Rhodes

The builder Cares de Lindos, created on the island of Rhodes, Greece, a statue measuring 39 meters in height, destined to disappear 59 years later during an earthquake. There are many references to this monument as its pieces were in the site where it fell for the following 800 year. Among other writers, Pliny the Elder alludes to the marvelous statue. Rhodes is an island with many great attractions.

Among other wonders in disappearance are: the statue of Zeus, created by Phidias, in the city of Olympia where the Olympics were born; today it is an archaeological site in Greece. The Temple of Artemis in Effuses, Turkey, in the valley of Ayasoluk, which’s construction occurred during 120 years, and the Mausoleum of Halicarnassus, finished in the year 353 before Christ. 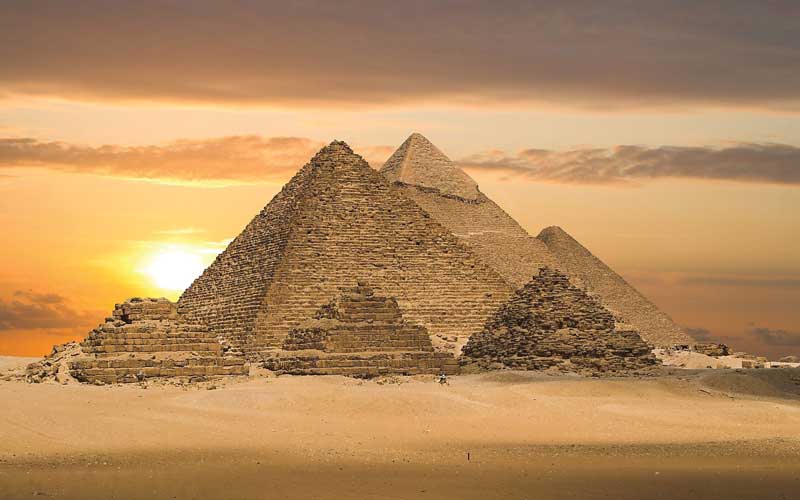 The Great Pyramid of Giza.

The Great Pyramid of Giza

The Pharaoh Keops commissioned its construction by Cairo and it is the only wonder that still exists. It is, simultaneously, the most ancient of the lot. It was finished in the year 2,570 B.B and, until great cities with skyscrapers were built, it was the most colossal building of the world. It is surrounded by mystery because those who built it carried each block with a weight of over two tons. The Great Pyramid of Giza needed two million of these blocks.

The 7 wonders of the model world

According to 100 million voters, who cast their vote in an International contest in the year 2007, seven wonders were chosen. The number seven was meant to symbolize good luck and Genesis. Out of 200 contestants, 21 were among the finalists and only the following remained. All can and should be visited. 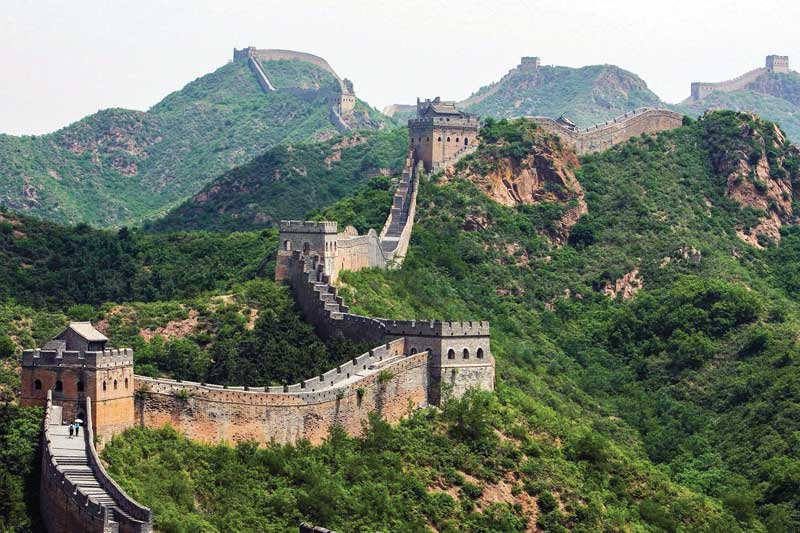 The Great Wall of China, China.

The Great Wall of China, China.

Located at the north of the Chinese Empire, it is a prodigy in engineering. It began construction during the Ming dynasty (XV and XVI centuries) upon previous structures used as a barrier against their enemies. The wall reaches areas of several thousands of kilometers, which extend from the Korean border to the south of Mongolia, housing at some point almost a million warriors. Today it is a symbol of pride in China. So many people visit the wall each day that recently the limit of visitors per day has been diminished to 65,000. 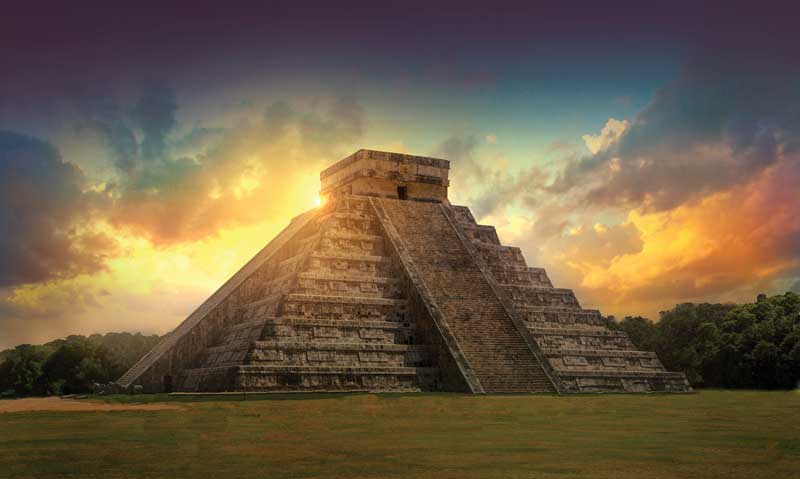 In its time it was the most powerful and prominent city in the Yucatan peninsula, in Mexico, and the capital of the Mayan World. It was founded between 325 and 550 A.D. When Spain arrived, it was seen as the center of culture and pilgrimage. It is still an important and sacred site for current Mayan groups. The lines of frescos engraved on its walls and columns are still notable.

People can visit 47 acres of the city, which’s total extension is 15 square kilometers. Its second most emblematic site is the Kukulkan Pyramid, with a game of lights and shadows that depict a snake sliding down the steps during the spring equinox. It houses the largest Juego de Pelota in Mesoamerica and the installation Group of the Thousand Columns. 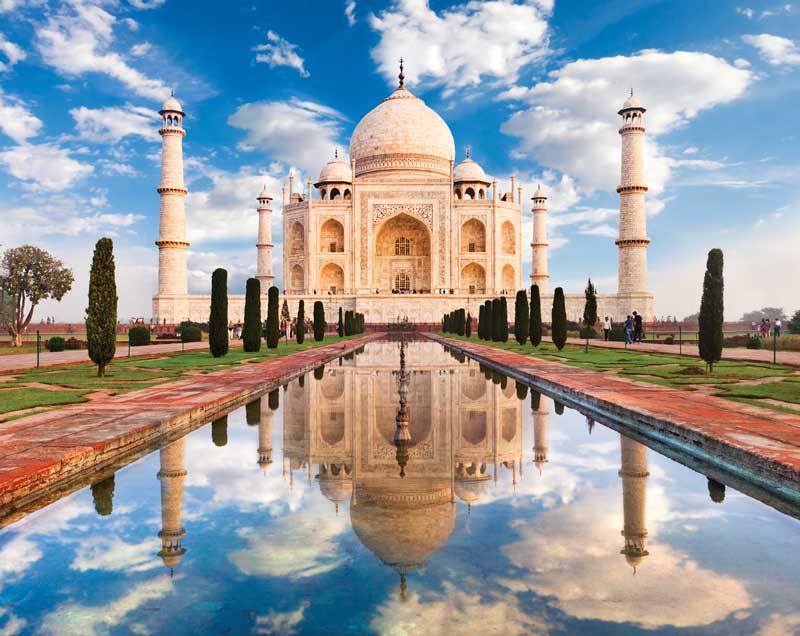 Its name means “crown of palaces” and it consists of a compound of buildings where the main one is the mausoleum, created with the intentions of being eternal. One of its innovations consists of being built without columns. Planned out to induce wonder, its architects used a style that mixed influences from the Persians, India, muslims, and some Turkish. Additionally, the architects made it possible to have optical illusions. Calligraphy, viewing windows, domes, portals, arches and decorative panels carved in marble, stone, and other details of great beauty, with the objective of expressing eternal love. 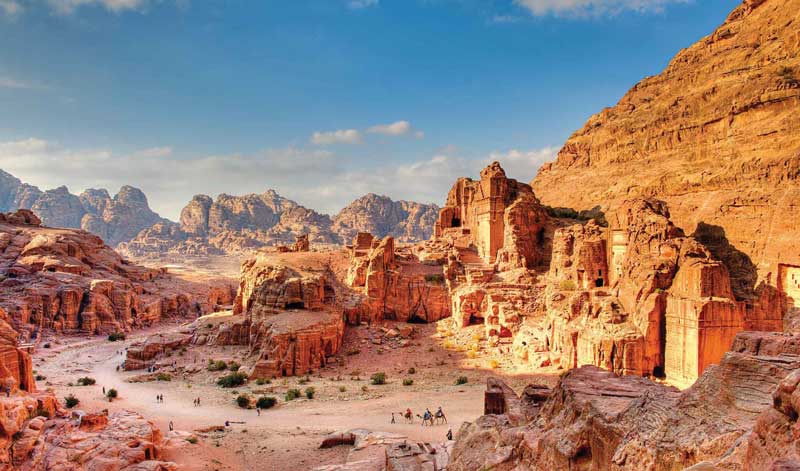 It is still considered the greatest treasure of Jordan. A Metropolis carved in stone known as the pink city. Due to its location, two thousand years ago it connected trade routes where merchants from China, India, Egypt, Syria, Greece and Rome would meet. It was already known as a wonder of the ancient world and contemporary competition gave it just recognition. Its exterior is impressive, measuring 39 meters wide and 40 meters tall, you can visit its theatre, temples, monuments, altars, columns and the jewel of it all: Its monastery, after climbing up 800 steps. 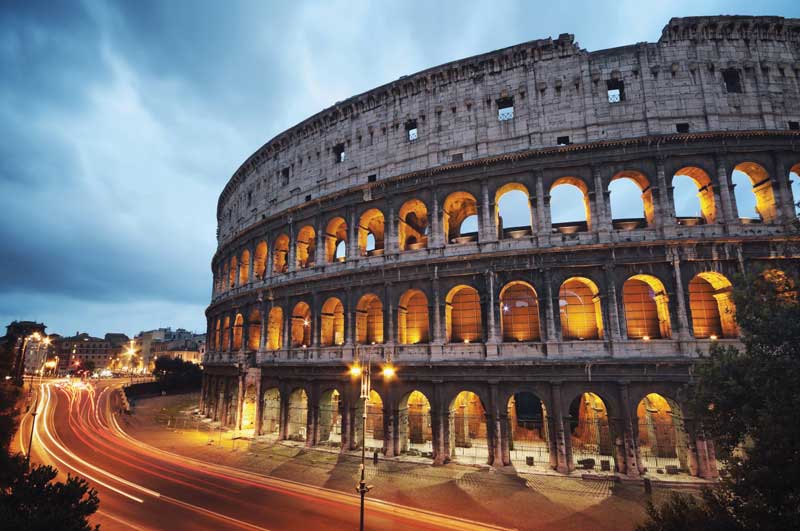 It represented the splendid quality of the Roman Empire. It was inaugurated in the year 80 B.C. with a celebration lasting 100 days. Coliseum translates to Colossus, which means colossal. It was the largest structure of ancient times, housing up to 50,000 people within 80 rows of seats. Underground was a maze of spaces and 24 elevators to move gladiators and animals to the arena. The Coliseum was functional for 500 years. Today it remains as one of the most visited sites in Italy. 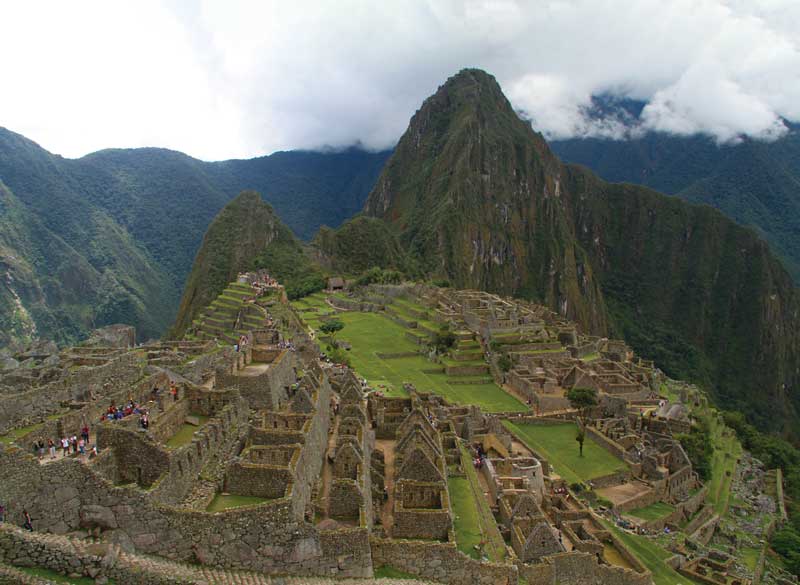 The city is a milestone of architecture and engineering created by the Inca culture of Peru, who occupied the site for three generations. It was built between the 5th and 15th centuries, according to archaeologists. It is an ideal location for observation of astronomy, which played an important role in the deities of the civilization which inhabited it. The location adored the elements, the earth and nature. It is located 130 km away from Cusco, Peru. 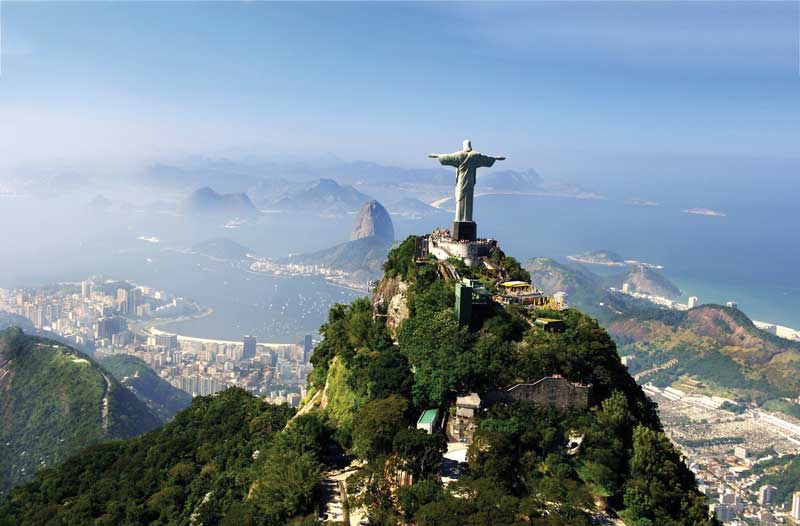 Christ of Rio de Janeiro or Christ of Corcovado.

Christ of Rio de Janeiro or Christ of Corcovado

From any corner of Rio de Janeiro, one can see its majestic figure standing 710 meters above sea level, on the peak of Corcovado: with its arms wide open, it embraces all who witness it. It was finished in 1921, after 5 years of building. It’s located in the National Park by the name Tijuca and is a universal symbol of spirituality. The statue was made by French sculptor Pal Landowski, its face is the work of Gheorghe Leonida, a Romanian sculptor.

As it turns out, action became flesh. The creative power of mankind and the universe remain in constant and continuous evolution. At a certain quantum point of multiple scales of time, past, present and future occur in unison. 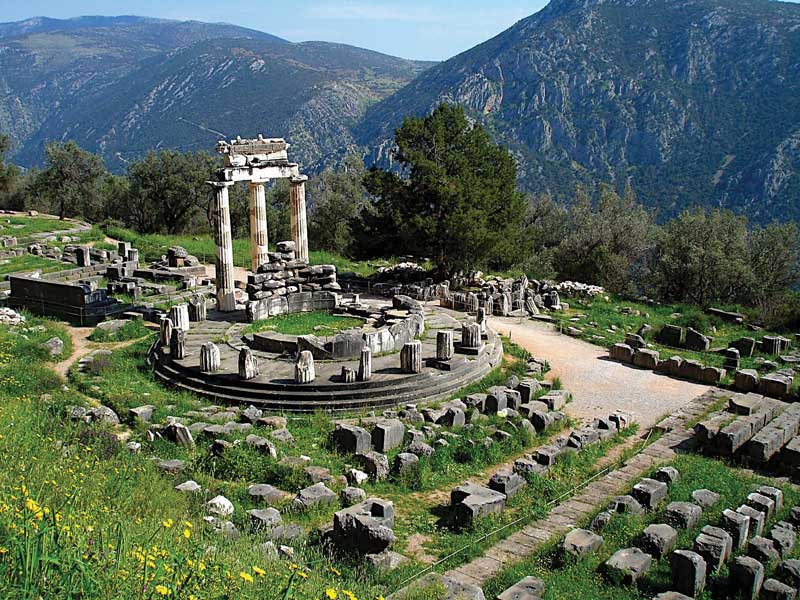 The Oracle of Delphi in Apollo’s Temple

God of light and the sun, it is a fundamental site of Ancient Greece, inhabited since the XVII century in its physical space. However in its symbolic state, regarding the knowledge it harbors, it is as much alive now as ever.

"Know thyself", It is a mandate inscribed into a place before the door of the Temple of Delphi, so that it would be a requirement to read it upon entering and leaving. It is wise to stop at this point, which reminds us incessantly that polishing of what you are seeking to highlight is always the path to take.

Life’s a journey in which we may change our minds, start anew each waking day. When we face any situation, we lighten the burden by imagining laughter, and dancing until dawn. We must symbolize miracles, because everything is always happening here and now, in the only possible venue: the mind.