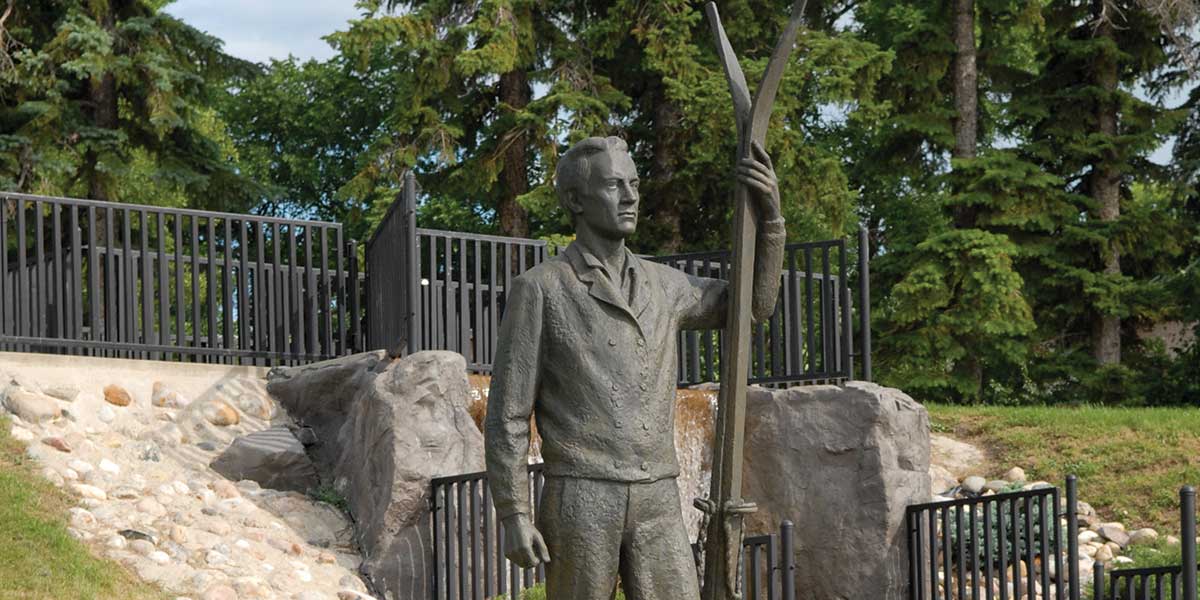 Who would have thought that alpine skiing and downhill skiing had their beginnings in Morgedal, a small town in the Norwegian province of Telemark, where Sondre Norheim, known as the fa-ther of both disciplines of winter sport, was born?

The International Olympic Committee (IOC) paid tribute to him during the torch lighting of the 1952 Oslo Winter Olympic Games in Morgedal – considered the birthplace of slalom and ski jumping –. A recognition of Northeim’s Olympic contributions. This ceremony was repeated at the Olympic Winter Games in Squaw Valley (1960) and Lillehammer (1994).

In Morgedal, Sondre Norheim is even remembered with a life-size statue, accompanied by his inseparable pair of skis. On the pedestal it reads: Sondre Norheim (1825-1827), father of modern skiing.

Sondre Norheim, son of peasants, is remembered in Mordegal for his constant descents using a pair of rudimentary skis made of pine by his father, Ouver Eivindsson, a skilled craftsman.

It was common to see Norheim perform all kinds of jumps and spins on the snow (without any protection), relying solely on his natural ability. Once, in complicity with his brother Eivind, he jumped over the roof of the hut where he lived, after placing a ladder that served as a ramp which he covered with branches and snow.

Husband and father, he continued descending and jumping on the ski slopes in search of greater thrills, dodging trees and cliffs at extremely fast speeds. While sliding, he tried to change direction quicky and avoid any possible fatal accident; finally, one day he discovered that he needed to modify the shape of the skis and adjust them differently to his feet. 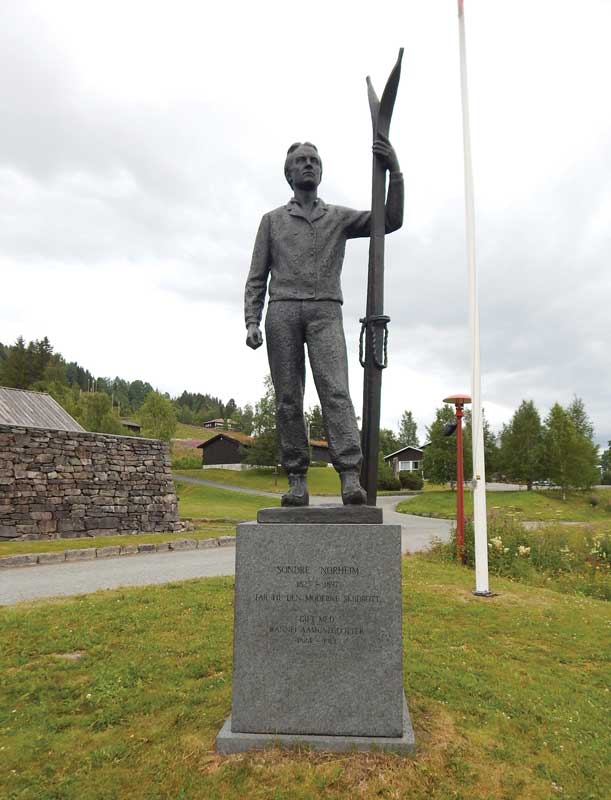 In Morgedal, Norway, a statue was herected in honor of Sondre Norheim.

He made them himself

To improve performance on snow, he developed a pair of shorter skis, with the tips slightly curved upwards, and straps made of twisted birch and willow roots, firmly attached to the skis and around the heel, which allowed him to change trajectory easily, with a quick body movement.

The next step was to perfect his technique –similar to that executed today in the slalom on downhill events of the World Cups and Olympic Winter Games – becoming an unstoppable skier.

His local prowess crossed borders and he received an invitation to participate in a professional competition in Christiania, the former Norwegian capital. His arrival at the event was not easy: Sondre Norheim skied for three days the 124 miles that separated him from his destination. At 42 years of age, he not only conquered the challenge, but also astonished those present with his never-before-seen style and the skis… of his own creation. 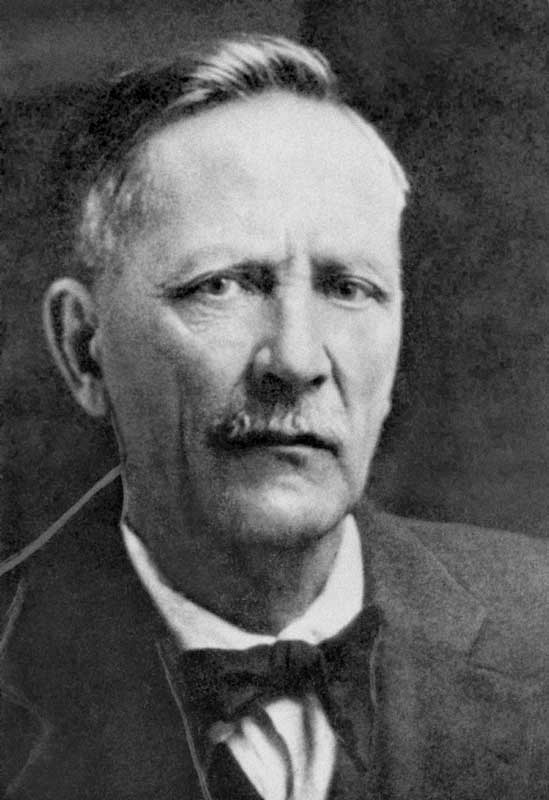 A man who was not afraid of snow and mountains

Back home, he dedicated himself to sharing his technique with children and young people, and at the age of 59 he immigrated with his family to the United States. In his new home he continued to ski, but not competitively.

Sondre Norheim passed away at the age of 71 in North Dakota, and in recognition of his contribution to the winter sport, he was inducted into the U.S. Ski Hall of Fame.

His technique of descending on snow was introduced among the following generations of Norwegian skiers in the 20th century, spreading to the Nordic countries and all of Europe. In the 1970s it arrived in the United States, under the name ‘Telemark turn’, later known as the ‘Christiania turn’. Today, the style has undergone adjustments, but maintains the essence inherited from Sondre Norheim. 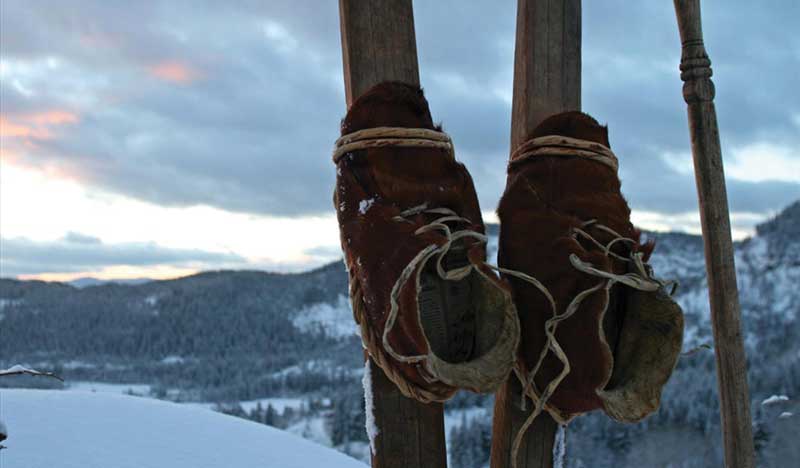 The skis made by the famous Norwegian sportsman. 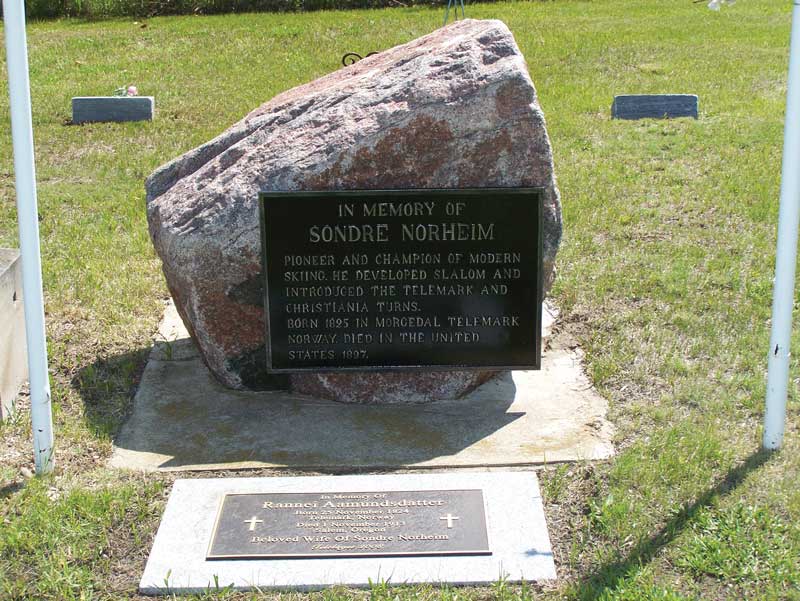 In North Dakota lie the mortal remains of Sondre Norheim.