Visiting the Galapagos is like taking a leap in time, to a time where iguanas roam between our feet, with numerous turtles, sea lions, cormorants and blue-footed boobies. 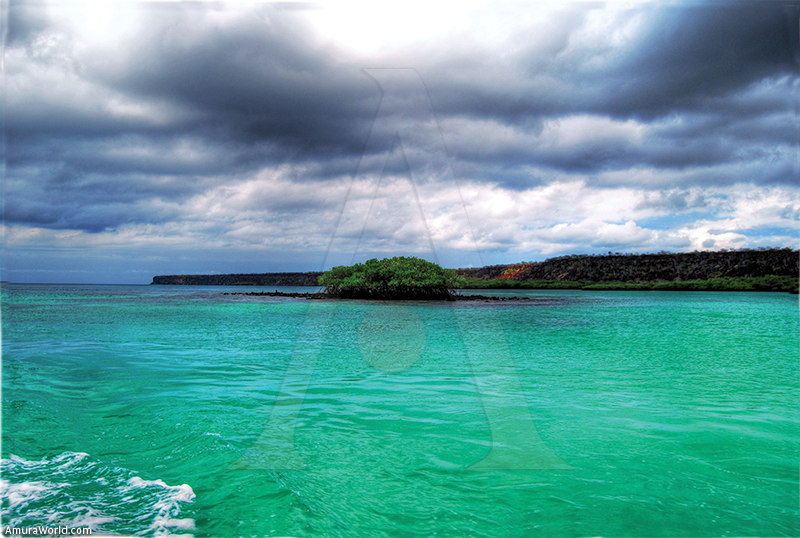 To walk on these islands makes one feel as an explorer, away from civilization small trails and plowing through rocks and sand to discover a colony of flamingos, iguanas of different colors, coral and white sand beaches and dark lava soils.

All we see is remarkable, because most of the flora and fauna in here is not found anywhere else. 80% of the land birds, 97% of reptiles and mammals, as well as 30% of the plants are endemic of the region, according Galapagos Conservancy. Some of the most relevant are the Galapagos tortoise, the marine iguana, the cormorant and the Galapagos penguin. 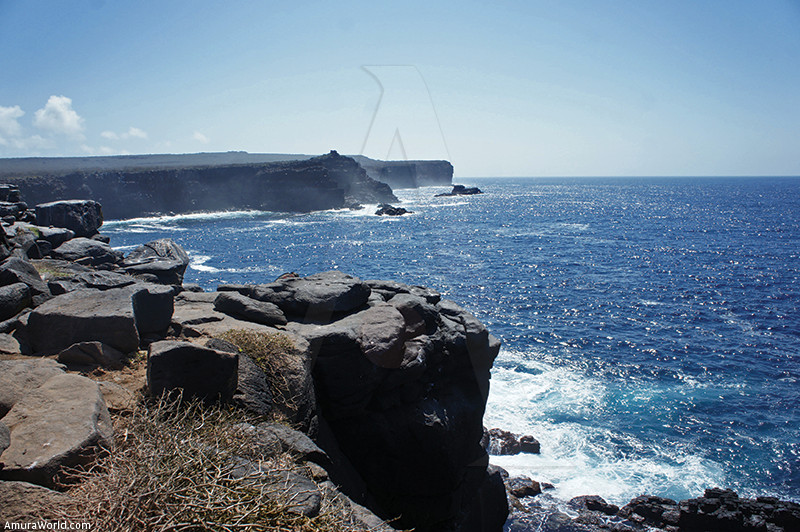 Darwin and the Galapagos

The islands gained their fame thanks to Charles Darwin, who in 1831 embarked on the Beagle from England. He reached the archipelago in 1835, where he stayed five weeks and studied the different species and then wrote his Theory of Evolution. Darwin was 26 and after visiting South America, he stopped here in order to study some turtle species. Upon arrival, he was impressed to find flora and fauna unique of its kind. It was until 1859 that gave final shape to his Theory of the Origin of Species, which sparked much controversy. The theory states that species evolve to survive and that those species with best fitting qualities are surviving. In particular, the English scientist studied the case of Darwin’s finches, 13 varieties that are all from the same ancestor which were adapted to diets as varied as cactus or parasites.

Since 1978 the Galapagos have been declared a World Heritage Site by UNESCO and therefore, there are different restrictions for those wishing to visit. Only a limited number of tourists are allowed and there is a checkpoint at the airport in Quito to check for prohibited items such as food, fauna or flora, which may affect the inhabitants of the islands. At 600 miles from the mainland, this site is virtually untouched by the hand of man, and life goes on the same way for thousands of years. The alternative of traveling by boat is very comfortable. The ship is anchored a few meters from the beach, passengers descend to the coast in an inflatable boat, make an excursion in the company of a naturalist guide and return to the comfort of their cabin or enjoy the sunset on deck. The food is usually very nice and the guides are very experienced and love to present this very special corner of the world.

We flew from Quito to Baltra. The capital of Ecuador, Quito, is a colonial city which is worth spending at least a full day to enjoy its many churches, its historic center and other attractions such as the Equator Middle of the World. Both, upon departure and arrival our luggage was inspected to check that we did not have something that could affect the habitat of the archipelago.

Once we past the inspection, we were greeted by the person in charge of our boat and a bus took us to the dock. Once there, with life jackets, we went on a “panga” to the Evolution, a boat with wooden floor and a classic touch in its line and decoration. We would spend the next week on board in an atmosphere of adventure and amazing discoveries.

After settling in and enjoying a very good meal, the group split into two to make a panga ride and observe wildlife consisting mainly of blue-footed boobies, sea lions and iguanas. This was to be only a taste, because the next day, we would saw so many marine iguanas at Punta Espinosa, and once in Fernandina Island, we had to walk carefully to avoid stepping on them. Among a rocky landscape, the grim characteristics of the reptiles remitted us to prehistoric times, as if time had stopped. The iguanas did not acknowledge our curiosity or our presence. We saw many on the ground and some in the sea. Back on board and as every night before dinner, our enthusiastic guides gave us a chat about what we would see the next day. 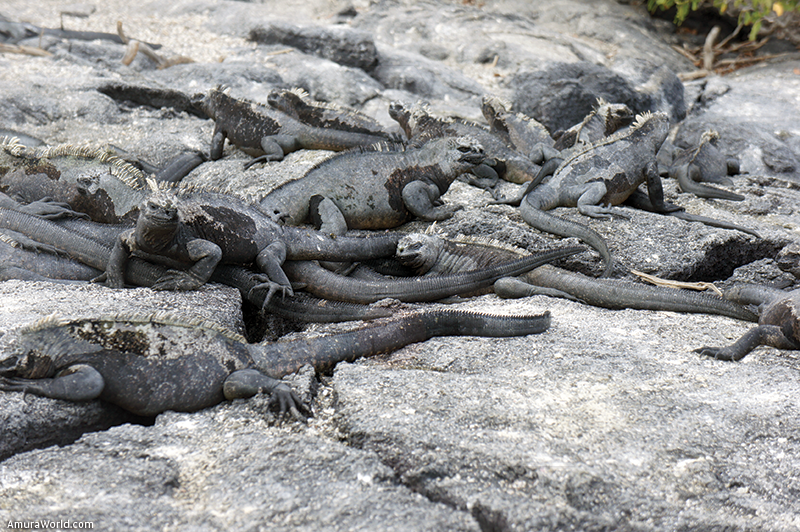 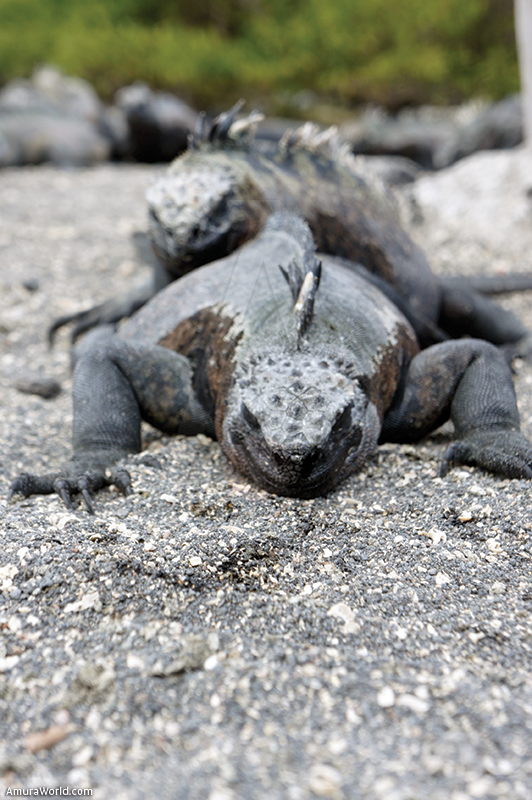 On the Isabela Island we saw other types of iguanas. They were ground iguanas and got our attention because of their huge size and peculiar golden yellow color. After a short time of fun kayaking, we took the opportunity to observe several pairs of mating turtles. Still on Isabela Island, but on the west side, we went up a hill to see the crater where the Darwin Lagoon is located, a saltwater basin which is above sea level.

Back at the Evolution we were lucky. Almost a hundred dolphins accompanied us on our sail. The 34 passengers on the ship, from children to grandparents, took photos, observed with binoculars and were screaming with excitement at the sight. The afternoon had another thrilling event in store for us. It was the crossing of the line of the Ecuador and to observe the exact zero mark on the navigation compass of the ship.

We arrived at Bartolome Island, where we climbed to the top of a hill to enjoy a spectacular view. This site has a rustic ladder for an easy way up. There are 600 meters uphill to get to the top, where you can see the island as it was after the last volcanic eruption. That afternoon we visited a great extension of lava, rich in whimsical shapes and textures, as if an artist had created them. Among the animals that can be seen near the sea are the colorful crabs and the penguins. 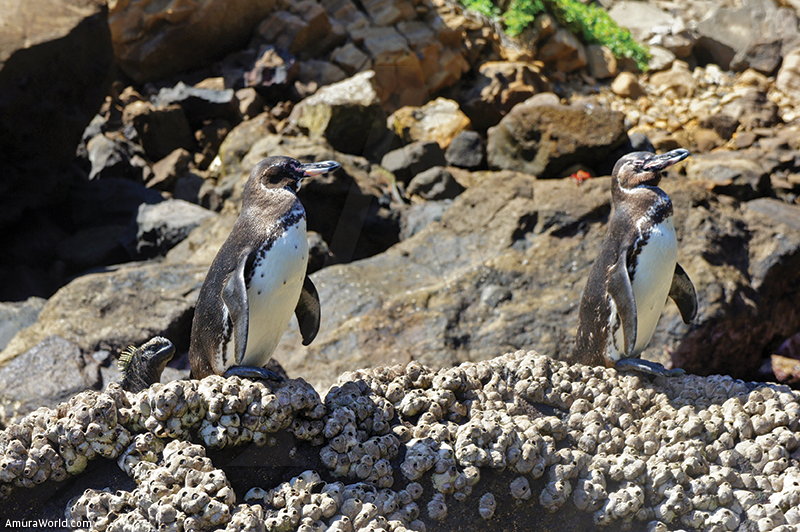 Every day we began our excursion at 9am, after breakfast. Each morning brought us a surprise. During the third day, we saw flamingos on the island of Santa Cruz, which led us to realize how each island has its unique and very different ecosystem. Here, we took a long walk during which, we could go from mangroves to a dry area where the vegetation was cactus. 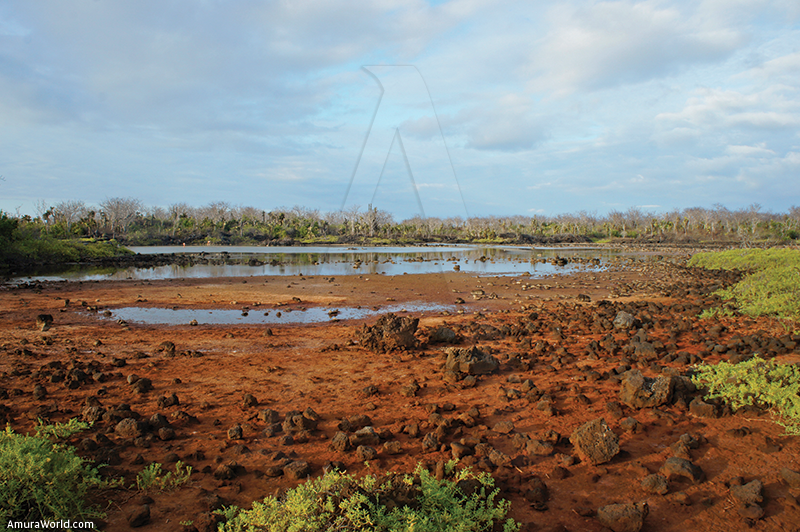 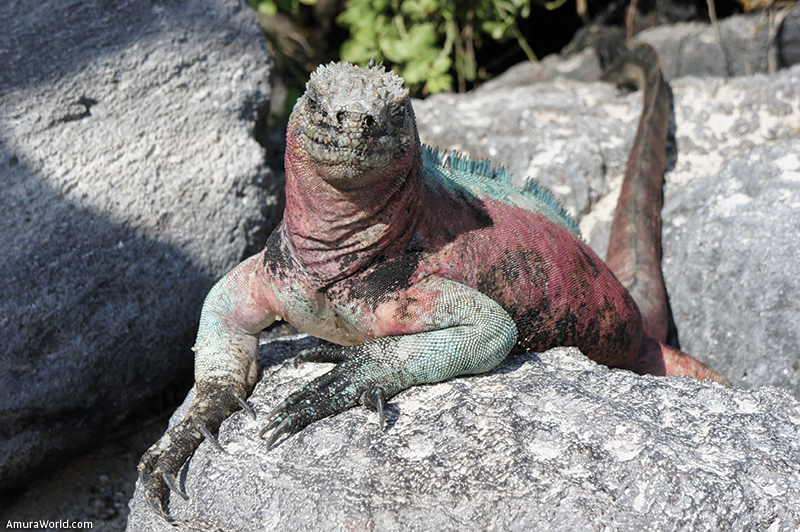 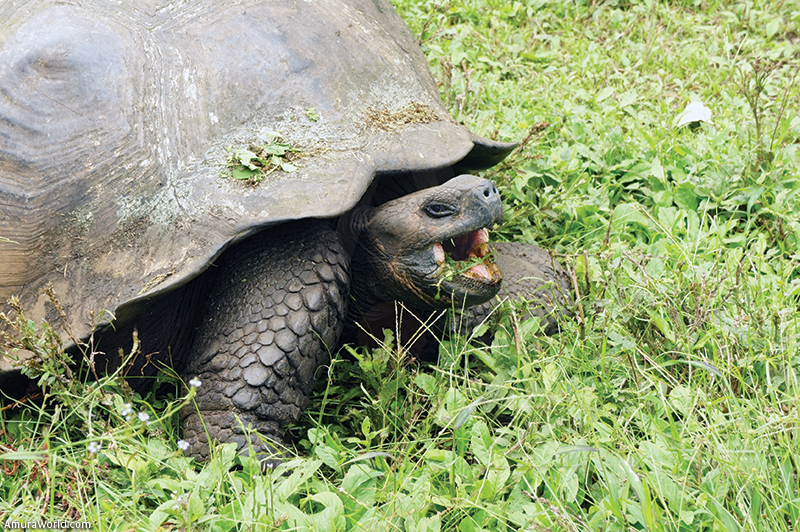 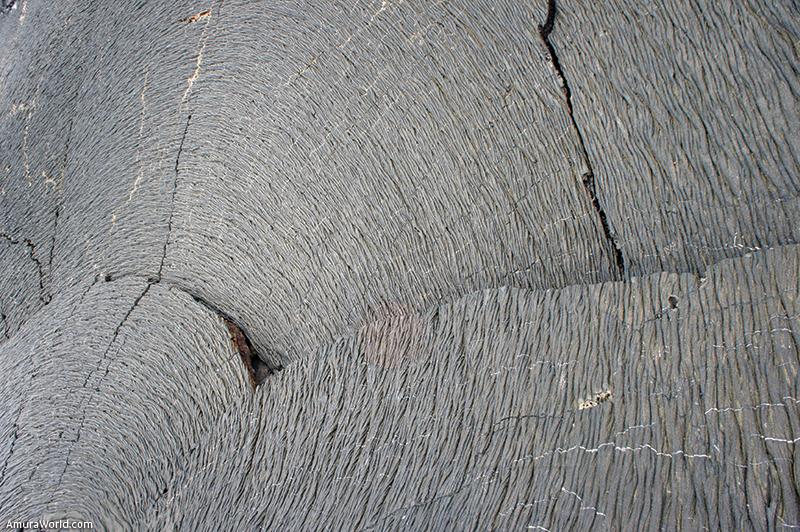 The fourth day was very nice and different. After being isolated, we visited Puerto Ayora on Santa Cruz Island. First we went by bus to the top of the island, where vegetation is abundant; then, we rode through a lava tunnel and went to visit a tortoise reserve. The size of these animals is impressive. In the afternoon, after visiting the Charles Darwin Research Station, we walked among the shops and cafes of the Port. It was strange feeling returning to civilization and we missed the solitude of the seas and the company of birds.

Fortunately we still had one more day of adventure in Punta Suarez, in Espanola Island. We saw cliffs, raging waves, an albatross, blue-footed boobies and other birds, plus some black and red iguanas we had not seen in previous days.

To say goodbye, we walked the beach at Gardner Bay where sea lions of various ages resting. The youngest approached us without fear and acted as if they were puppies, biting our life jackets that were on the sand. After saying goodbye to these friendly mammals, we snorkeled before returning to the ship for our last dinner on board. 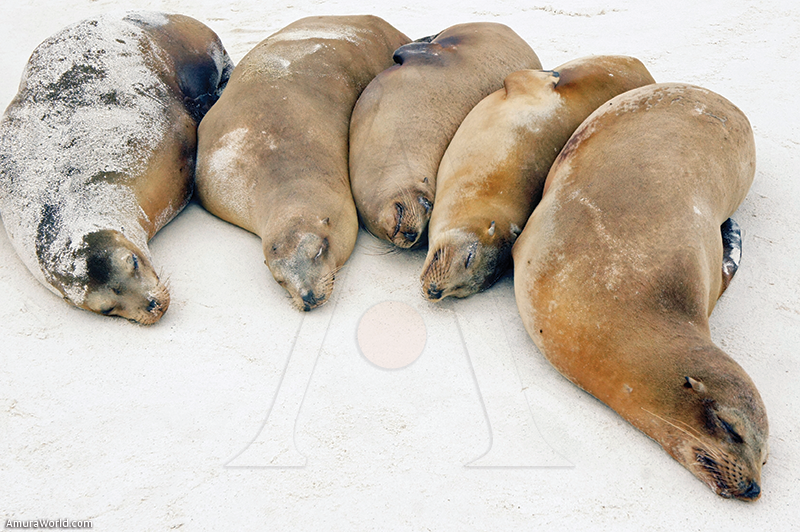 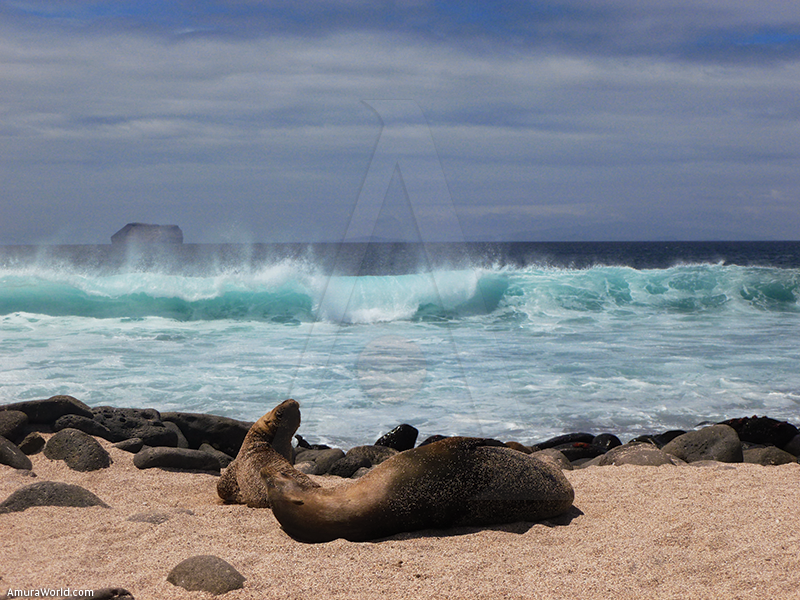 On Saturday we arrived to San Cristobal, where sadly. We left the boat and took the flight back to Quito. The adventure, for now, was over, we brought home many memories and knowledge, but especially a new awareness of our role in caring for this incredible piece of the world.

The Galapagos have suffered strong environmental impacts. The population has increased by 300% in recent decades. Furthermore, with the arrival of new residents and their pets, it has come to endanger native species. Fishing has also been blown out of proportion and the number of tourists has grown significantly. All this made us responsible tourisms, and to leave with the minimum possible footprint. This means not to feed or touch the animals, not littering, to visit the archipelago with a certified guide and not to take any rocks, plants, sand or anything from that site. 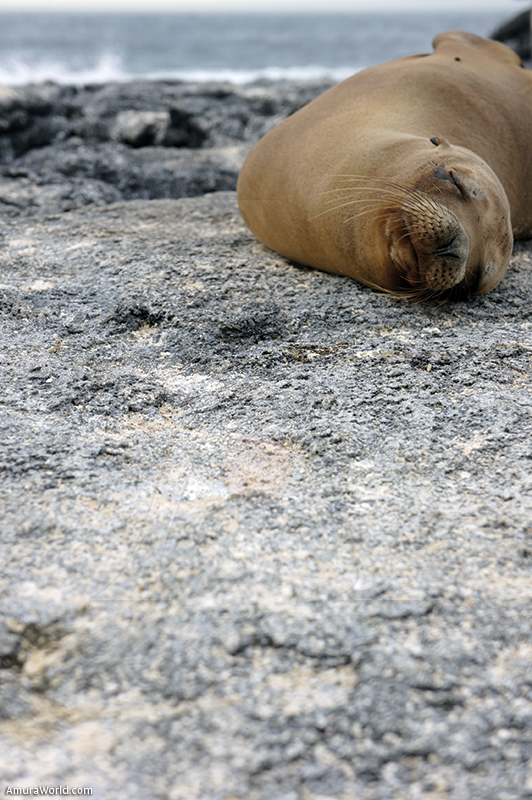 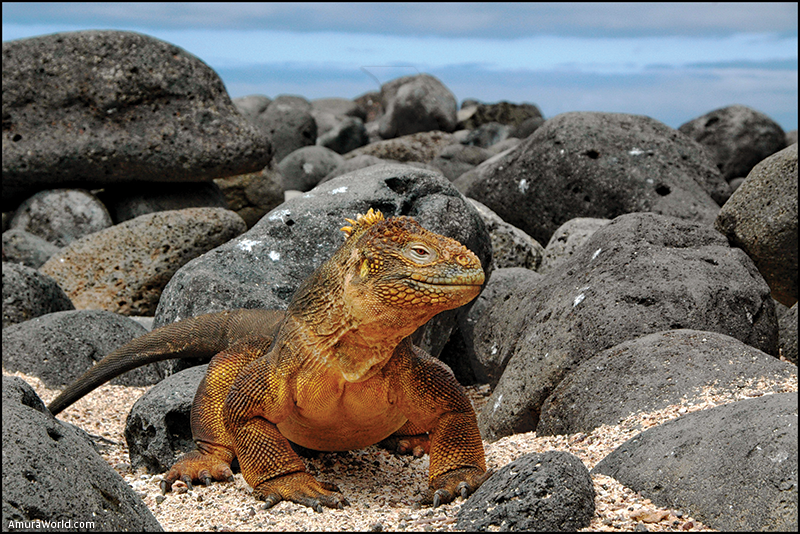 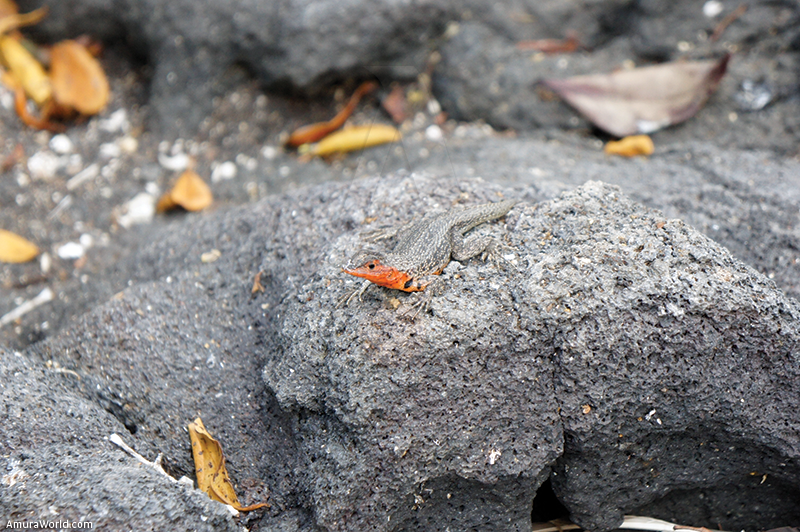